OXON HILL, MD – The Maryland State Police is reporting that the investigation into an alleged road rage shooting that occurred on Friday, September 23, 2022 in Prince George’s County continues.

The suspect vehicle is described as a silver Volkswagen 4-door sedan with tinted windows. The driver is described as a black male, 20-30 years old with slight facial hair. It is unknown whether there were any passengers.

The victim, not being identified at this time, was driving a black Hyundai Sonata sedan. He was transported to Inova hospital in Fairfax, Virginia where he received treatment for injuries sustained during the incident.

There was one passenger in the front seat of the victim’s vehicle at the time of the incident. She was not injured.

Investigators from the Maryland State Police Forestville Barrack and the Criminal Enforcement Division Central South Region believe the incident occurred between 10:20 P.M. and 10:30 P.M. on September 23, 2022. Police were advised that the victim was traveling southbound on 295 approaching the ramps to northbound I-495, National Harbor, and southbound I-495 when the altercation occurred with the suspect vehicle.

Police are asking any witnesses who may have witnessed the incident to contact Maryland State Police at the Forestville Barrack at (301) 568-8101. All callers may remain confidential. 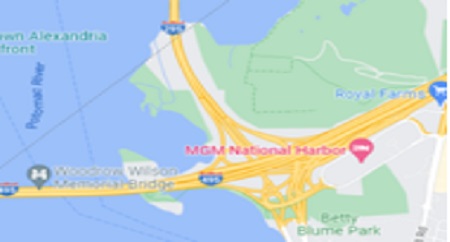