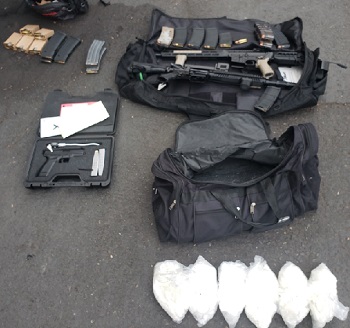 CLACKAMAS COUNTY, OR (September, 27, 2022) - The Oregon State Police is reporting that on September 2, 2022, around 5:00 P.M., an OSP Trooper stopped a vehicle for a traffic violation in Clackamas.

During the traffic stop, the driver displayed signs of impairment and after a subsequent investigation was taken into custody for DUII.

The driver identified as Thomas James Freeman (37) of Portland was detained by his Probation Officer. During a search of the vehicle, the Trooper noted several signs of recent drug activity along with locating a loaded pistol.

The vehicle was seized and searched on probable cause and exigent circumstances. The vehicle and several lock boxes seized from inside were taken as evidence, pending a search warrant application.

The search warrants were served on September 14, 2022, and the following items were seized.

OSP Troopers were assisted during the investigation by Detectives from the OSP-Criminal Investigations Division-Drug Enforcement Section (Domestic Highway Enforcement Initiative) and the Major Crimes Section.