ANNAPOLIS, MD – The Maryland State Police (MSP) is reporting that MSP Troopers from the Annapolis Barrack and the Criminal Enforcement Division Central South Region are investigating a possible shooting in the area of Route 50 after arresting a Washington, D.C. man on multiple gun charges.

The accused is identified as Marcel Howard Hayes, 40, of Washington, D.C.

Marcel Hayes is charged with:

Hayes is being held without bond at the Anne Arundel County Detention Center.

Photos of the Hayes vehicle provided by the Maryland State Police. 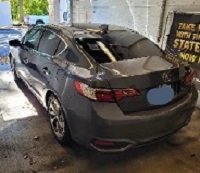 Shortly before 2:45 A.M., on September 26, 2022 Troopers from the Annapolis Barrack received a call from a motorist, later identified as Hayes, advising that he was being chased.

Troopers located Hayes and his vehicle in the area of Annapolis Street and Monterey Avenue in Annapolis. He was driving a silver Acura ILX with District of Columbia tags.

Once they made contact with Hayes, Troopers observed a bullet hole through the front windshield of his car. Investigators believe the gunshot may have come from inside the vehicle. While conducting a nearby ground search, Troopers located a black Ruger handgun.

A subsequent search of the vehicle resulted in numerous shell casings and suspected Crack Cocaine. The shell casings matched the type of gun located during the ground search. Hayes was subsequently placed under arrest without incident.

Police are asking anyone who may have witnessed events related to this incident, or may have been a victim of a shooting in this area to contact the Annapolis Barrack at 410-267-5800 or .