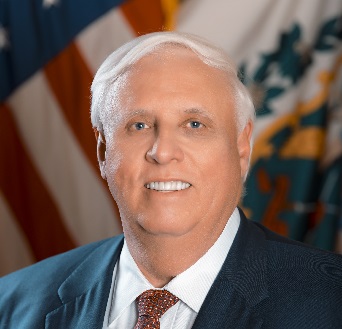 During the event, Governor Justice led the ceremonial countdown to knock down a dilapidated house.

“West Virginia is becoming the diamond in the rough and people are noticing,” Governor Justice said. “Let’s get rid of these buildings that are holding us back, join hands in moving our state in the right direction, and let’s start right here in Matoaka.”

The WVDEP's newly established Reclamation of Abandoned and Dilapidated Properties Program will administer the funding, which will be provided as reimbursement for demolition projects and qualified associated expenses.

"We're extremely excited about this program and feel it has the potential to transform communities across the state," Secretary of the WVDEP Harold Ward said. "Removing these structures provides a critically-needed health and safety component, while clearing the way for new economic development and boosting tourism."

In 2021, the West Virginia Legislature passed Senate Bill 368, which authorized the WVDEP to develop a statewide program to assist county commissions and municipalities remediate abandoned and dilapidated structures but did not provide immediate funding.

Over the following nine months, the WVDEP conducted extensive due diligence, including sending detailed questionnaires to all 55 counties and 168 incorporated towns and cities in the state.

From the 81 responses it received, the WVDEP learned that 35 communities already had existing programs to address this issue, all of which had a proven track record of demolishing structures and associated costs.

This data was incorporated into the WVDEP's development of a pilot program for 21 selected counties and towns. The maximum amount each candidate would be eligible for reimbursement was determined by the number of their targeted properties, average cost per structure, and previous experience. The combined budget for all grants was just over $9.2 million.

Upon reviewing this data and selection process, Gov. Justice requested the Legislature to approve a transfer from the Coronavirus State Fiscal Recovery Fund for the pilot program. That request resulted in the passage of Senate Bill 722 earlier this year, which transferred $10 million to the program.

"All the credit goes to Governor Justice and members of the state legislature for creating the program and securing funding for the initial phase, and to our staff for getting it off the ground," added Ward. “If additional funding becomes available, we hope to be able to target more communities that may not have any mechanisms in place to deal with these structures."

Selected communities will have 12 months to spend up to their approved budgeted amount, with the possibility for a single six-month extension. No payments will be made until demolition work is completed and all required supportive documentation has been submitted.

The selected communities include: