ARREST AND LARGE HEROIN SEIZURE ON U.S. 97 IN JEFFERSON COUNTY, OREGON DURING TRAFFIC STOP OF A VANCOUVER, WASHINGTON DRIVER FOR SPEEDING 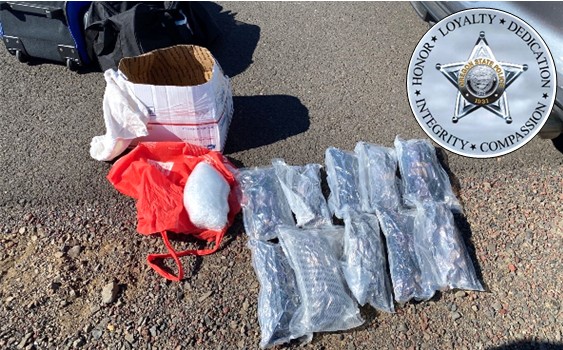 JEFFERSON COUNTY, OR - The Oregon State Police is reporting that on Sunday, October 2, 2022, at about 12:53 P.M., an OSP Trooper stopped a vehicle for speeding on U.S. 97 near milepost 84, about 13 miles north of Madras. During the course of the stop, reasonable suspicion was developed for drug trafficking.

A search of the car revealed 11 bundles of narcotics in the trunk of the vehicle, with a gross weight of nearly 14 pounds, a preliminary test showed the narcotics to be Heroin.

The driver was identified as Tyler Facey (29) from Vancouver, Washington, along with a 23-year-old female passenger.

Tyler Facey was lodged in the Jefferson County Jail for:

The female passenger was released.