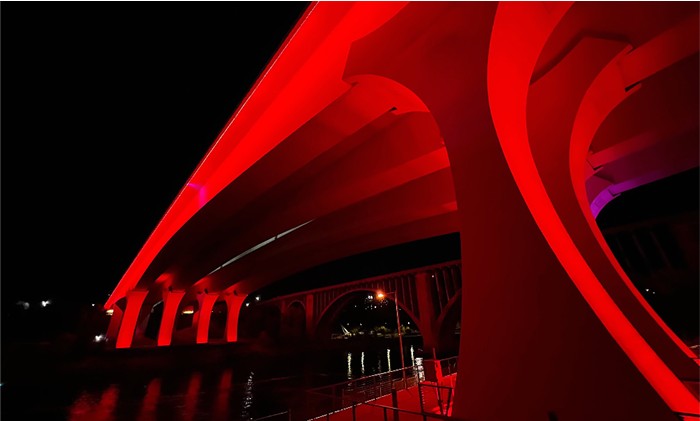 OMAHA, NE – The Drug Enforcement Administration (DEA) Omaha Division will join with communities across the nation in kicking off Red Ribbon Week, the nation’s oldest and largest drug misuse prevention awareness program, on Sunday, October 23. Landmarks across the five state division will light red in recognition of the annual event and Governor’s from Iowa, Minnesota, Nebraska, North Dakota and South Dakota have issued state proclamation encouraging their citizens to demonstrate their commitment to a drug-free lifestyle.

“DEA lost a special man in Kiki Camarena,” DEA Omaha Division Special Agent in Charge Justin C. King said. “It’s only fitting that his legacy lives on today through the work being done by countless individuals providing education on the dangers and consequences of experimentation and drug use.”

During Red Ribbon Week and throughout the year, DEA investigators visit with schools and community groups to discuss drug trends and promote drug awareness in communities.

“More than 107,000 American lives were lost to drugs last year,” King said. “I can’t stress enough how important it is for families to sit down together and have honest conversations about the possible outcomes of drug use and abuse. That one conversation can make all the difference in the life of your friend or family member.”

This year, 15 landmarks in the DEA Omaha Division are Going Red for Red Ribbon. A complete list of these landmarks can be found below. Communities across the nation are encouraged to “Go Red” by lighting up classrooms, offices, libraries, town halls and other locations using red bulbs, gel filters or red balloons and decorations. Participants can post their Red Ribbon photos on social media using hashtags, #DEARedRibbon and #GoRed4RedRibbon.

To speak with someone about the possibility of having a DEA education and awareness presentation at your school or community group, please contact Public Information Officer Emily Murray at 571-387-3545.