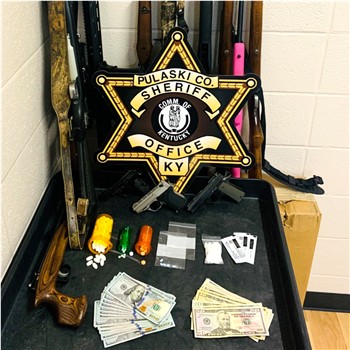 Detective Tan Hudson, with the Pulaski County Sheriff’s Office, Narcotics Division, saw a traffic violation by someone driving a white Chevrolet pickup at the intersection of KY 2227 and U.S. 27. Detective Hudson attempted to stop the pickup, but the driver continued on and pulled into the parking lot of Kroger north.

The driver still continued until Deputy Trent Massey pulled his marked cruiser in front of the driver causing him to have to stop. 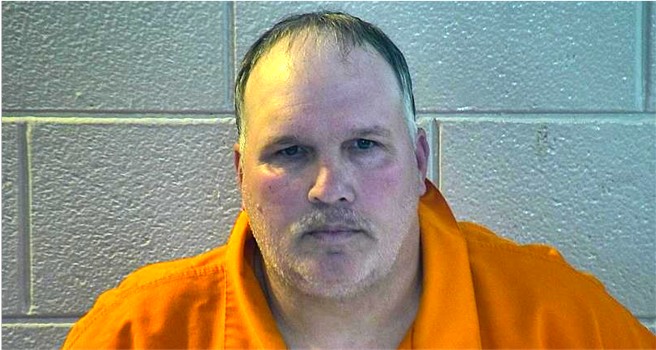 The driver of the truck was identified as Jerry Beasley from Somerset, Kentucky (Pulaski County Detention Center)

As part of the investigation, Deputy Massey deployed K-9 "Leo", who alerted them to the presence of Narcotics in the truck. Subsequent investigation led to the discovery of Beasley having five (5) tablets in a plastic bag in his right pocket. These tablets were determined to be Xanax, a Schedule IV (4) drug. Xanax is an anti-anxiety drug. Beasley had $130 dollars on his person. In the center console of the truck was another baggie and a green pill bottle with the label torn off. In the baggie were thirty-eight white tablets and in the green pill bottle were twenty-eight green pills.

Underneath the back seat of the truck was a rifle with a scope on it that was loaded and chambered.

Detective Hudson’s investigation determined the pills found in the console were Oxycodone and Hydrocodone, both of which are used for pain management. Detective Hudson arrested Jerry Beasley.

Jerry Beasley was charged with:

A passenger in the Beasley truck was not arrested due to a lack of evidence to show him connected to the drugs in Beasley’s truck.

In a room at the Beasley residence, investigators located an additional 12 guns with a large assortment of ammunition. Also located in the room were $1700 cash, 16 dose units of Suboxone, and 87 dose units of Gabapentin (Neurontin). The pills were in bottles that had no labels attached.

Another single Oxycodone pill was located on a dresser in the room.

All items seized were taken to the Pulaski County Sheriff’s Office and logged into evidence. The suspected controlled substances will be submitted to the Kentucky State Police Crime Lab for positive identification.

Jerry Beasley was charged with the additional charges of:

Jerry Beasley was transported to the Pulaski County Detention Center where he remains lodged as of this press release.

Photo of the accused courtesy of  the Pulaski County Detention Center.

Sheriff Greg Speck asked that if you have any information about drug activity or any crime, contact our office at 606-678-5145. You can remain anonymous. If you go to the Pulaski County Sheriff's Office website at http://www.pulaskisheriff.com/tip.php, it gives you three options to submit anonymous tips.