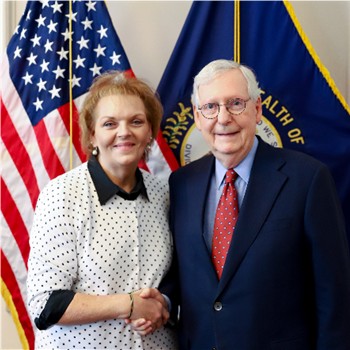 ‘Donna was endlessly patient, endlessly kind, and endlessly focused on helping constituents… Elaine and I and my entire staff were stunned and heartbroken to hear of Donna’s passing. Friends, colleagues, and neighbors across Kentucky are grieving her loss.’

“Donna worked in my London, Kentucky field office for fourteen years. She and her coworker, Donna McClure, ran their team as a dynamic duo. They were born only a month apart. They even shared the same initials. Back in Kentucky, they were known as just ‘the Donnas.’ And while Donna M. would travel around Eastern Kentucky, Donna B. was the rock who held down the fort at the office. She fielded calls. She greeted visitors. She solved Kentuckians’ problems.

“Donna was endlessly patient, endlessly kind, and endlessly focused on helping constituents. She was sweet and sometimes quiet, more of a listener than a talker, and deeply empathetic.

“She was the kind of person who would come to the verge of tears almost daily, after reading a news article or Facebook post about someone in need. But woe to anybody who mistook Donna’s big heart for any lack of determination. If Donna wanted something done — if Eastern Kentucky needed something done — she made it happen. That’s why condolence notes have poured in — to our office, and to Donna’s family — from all over Eastern Kentucky. All from people she helped through her public service.

“Donna’s work brought her into contact with important leaders, but I understand she was most excited when she had the opportunity once to snap a picture with Lee Greenwood. And I understand another longtime dream was fulfilled just this last August, when her duties led Donna to ride on a Blackhawk helicopter with the National Guard.

“After each year’s busy August state work period, Donna would always take vacation on the first day of September. Not to kick up her heels and take a rest, but to head out in the woods and hunt with her husband. This past year, she bagged a deer all by herself.

“Donna was the definition of Eastern Kentucky resourcefulness. If she heard you had some extra flowers lying around your house, she’d swing by to gather them for a beautiful arrangement. If you had leftover meat in your freezer, she’d want to cook it up and feed the whole neighborhood. In fact, she spent much of her time outside the office catering parties for her friends and neighbors.

“Donna and her beloved husband Doug met later in life, fewer than ten years ago. It was true love from the start, and Donna quickly became a doting grandma to Doug’s grandkids. She loved her brothers, Bruce and Bub. She loved her nieces and nephews. She cherished having such a dynamic family so close to home and treasured any time they could spend together.

“Donna was also a woman of deep faith who looked to the Bible in every single aspect of her life. Her home and her desk had signs containing just one word: ‘Blessed.’

“She savored every gift she received from the Lord. And her funeral service in London last week showed how Donna Butt-Moore was herself a blessing to everybody around her.

“Elaine and I and my entire staff were stunned and heartbroken to hear of Donna’s passing. Friends, colleagues, and neighbors across Kentucky are grieving her loss.

“I am so grateful for her service to the people of our Commonwealth.”