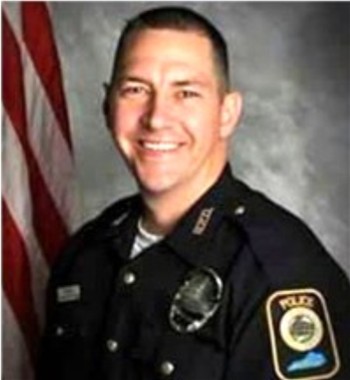 Laurel County, KY - Sheriff John Root is reporting the senseless murder of a fellow law enforcement officer in neighboring Nelson County. Bardstown Police Officer Jason Ellis was shot and killed on an exit ramp from the Bluegrass Parkway shortly before 2:50 am., Saturday morning 5-25-2013.

Officer Ellis was en route home at the time following his shift and was in uniform driving a marked vehicle. It is believed that he was ambushed on an exit ramp off the Bluegrass Parkway. Officer Ellis was shot multiple times possibly by a shotgun from a subject on a hill nearby. The subject who shot him remains at large.

Officer Ellis had served with the Bardstown Police Department for seven years. He is survived by his wife and two sons.

Officer Jason Ellis “rest in peace you are now a member of an elite group called The Thin Blue Line of Heroes”. There is no greater sacrifice that a person can give for his fellow man. Sheriff Root sends his sincere condolences to Officer Ellis family and to the Bardstown Police Department, its officers, and their families during this difficult time. Our unsung guardians have a special place in God's kingdom. Rest well, Brother, You have served bravely.