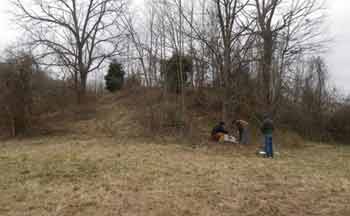 FRANKFORT, Ky. – A prehistoric Native American burial mound located within a rural subdivision in Greenup County is being donated by Town Square Bank to The Archaeological Conservancy, a national nonprofit dedicated to acquiring and protecting endangered archaeological sites.

Also included are two additional parcels in the subdivision, totaling about five acres.

“Once Tom Carver, the bank’s chairman of the board, became aware of the Native American mound, he took it to the board of directors and they unanimously voted to donate the property to The Archaeological Conservancy,” said Bruce VanHorn, bank president. “The board thought it would be in the community’s best interest to help protect and preserve a valuable piece of our area’s history.”

The public is invited to join representatives of the bank and conservancy during a ceremony at 2 p.m. Tuesday, May 12, during National Historic Preservation Month, on property adjacent to the site, when the deed will be transferred. In addition to VanHorn, others in attendance will be Rep. Tanya Pullin, Sen. Robin Webb, Greenup County Judge-Executive Robert Carpenter, Kentucky Native American Heritage Commission (KNAHC) Chair Helen Danser, Kentucky State Archaeologist Dr. George M. Crothers, and conservancy members Dwight Cropper of South Portsmouth, an archaeologist and KNAHC member, and Charles Holbrook III, a local attorney who is assisting with the property transfer.

The elliptical mound measures approximately 20 feet high by 80 feet long. It was only recently recorded with the Office of State Archaeology after Stuart Nealis, a doctoral student at the University of Kentucky, did a project investigating the site using geoarchaeological investigation methods. A preliminary survey shows the mound dates to the Fort Ancient or Woodland periods, from 500 to 2,500 years ago, though the exact time period has yet to be determined. The earthwork has been named the Town Square Mound in honor of the bank’s contribution.

“We think bringing awareness to these sites is important, and another reason we wanted to do this public ceremony, to thank the bank but also in hopes that others might recognize a similar feature on their own property and take action to protect it,” said Josh McConaughy, associate director of the conservancy’s Midwest regional office. “This mound is very intact, which is unusual, so there is a great deal it might be able to tell us about early Native American culture.”

“We do recognize this is a sacred, spiritual space associated with funerals," he added.  “Any type of research we might allow going forward would not be invasive, but we would be open to further studies by professional archaeologists that could consist of core samples, ground penetrating radar, or other technology that would help us learn more fully what this site was used for.”

Town Square Bank dates to 1889 and currently has locations in Boyd, Greenup, Jessamine and Lawrence counties. The Archaeological Conservancy has preserved more than 465 prehistoric and historic archaeological sites across the nation, including 12 in Kentucky.

Those who wish to attend the public ceremony may contact the conservancy’s regional office for directions. Call McConaughy at 614-267-1100 or email.

An agency of the Kentucky Tourism, Arts and Heritage Cabinet, the Kentucky Heritage Council / State Historic Preservation Office is responsible for the identification, protection and preservation of prehistoric resources and historic buildings, sites and cultural resources throughout the Commonwealth, in partnership with other state and federal agencies, local communities and interested citizens. This mission is integral to making communities more livable and has a far-ranging impact on issues as diverse as economic development, heritage tourism, jobs creation, affordable housing, community revitalization, environmental conservation and quality of life.www.heritage.ky.gov