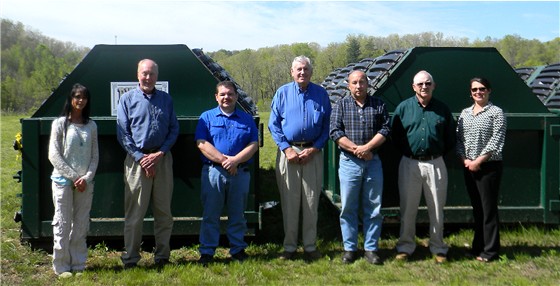 LOUISA, KY — Recycling just got a little easier for residents of three Kentucky counties, thanks to a cooperative effort among their fiscal courts.

“Instead of selling the recycling dumpsters for scrap metal, it’s a lot more valuable that they be used for their intended purpose,” explained Lawrence County Judge-Executive John A. Osborne.

“I called Judge Fannin in Elliott County to offer the dumpsters to our neighbors there,” Osborne said. “When we still had two dumpsters left, I called Tammie Wilson at PRIDE for a suggestion on who could use them.”

“I knew that McCreary County wanted more recycling equipment because a school there wanted to be a recycling hub for its community,” explained Tammie Wilson of PRIDE — a nonprofit organization that promotes environmental improvement and education across 42 counties of southern and eastern Kentucky. PRIDE was founded in 1997 by Congressman Hal Rogers and Kentucky Environmental Protection Secretary James Bickford.

“This is a great example of the regional cooperation that PRIDE strives to facilitate, so I was thrilled to play a role in bringing together two counties on opposite ends of our region,” Wilson said. “I commend Lawrence County’s leaders for expanding their recycling operation and for helping two other communities do the same.”

The donated dumpsters will allow Elliott County to establish a recycling program. The dumpsters will be located at the county garage, inside the fence.

“Elliott County residents will be able to drop off cans and plastic five days a week while the county garage is open,” Fannin said. “We’ll announce details soon.”

In McCreary County, the donated dumpsters will increase the existing recycling program. One dumpster was placed at the Beulah Mountain Christian Academy, creating a recycling hub in the northeastern section of the county. The other dumpster is at the recycling center in Stearns, replacing a mobile recycling trailer that now can be used elsewhere in the county.

“We want to thank the Lawrence County Judge-Executive and the Fiscal Court for blessing us with the bins,” said McCreary County Judge-Executive Douglas E. Stephens. “They have reached out to other communities at a time when it is difficult to ‘make ends meet’ and have increased our potential to make our recycling program work very efficiently.”

“Since 2011, our recycling goal has been to collect 250,000 pounds of recyclables per year, and last year, we came close to that goal,” Stephens explained. “This donation will surely enable us to meet that goal.”

The three counties offer recycling programs as a service to their residents.

“Recycling isn’t a money maker, but people like it, and it keeps the trash down,” Osborne said. “Recycling is a great thing. By the time you recycle, you don’t have hardly any trash left. It’s unreal how it cuts down on your trash.”

“Recycling is not only a good thing to do, it is the right thing to do,” echoed Stephens. “A community that recycles is a community that is beginning the journey to increase the quality of life for the people. It is a sign of people who want to make their communities a better place to raise their families and who believe that when we work together, we will make a difference.”

“If you want to start recycling at home or work, the PRIDE website has some materials to help,” Wilson said. “On our website, you can view and print a brochure about how and why to recycle. The website also has labels that you can print and stick on any container so you can turn it into a recycling bin.”

The PRIDE recycling resources are available at www.kypride.org/?p=3957.