I just received this email from Donald Trump and thought your readers might find it interesting.

The people of South Carolina and New Hampshire have spoken. Trump leads his closest opponent by double in South Carolina - 30% to 15% and in New Hampshire a stunning 35% to 11%.  And finally in our largest lead yet we garner 40% of the vote in a poll released today. Trump is the best choice.

Last week was incredible. Tens of thousands of supporters came to our Make America Great Again Rally in Mobile, Alabama.

Our message is taking hold all across America, and the polls show it. Once again, we are on top. The American people are demanding change - real change from the everyday politics of Washington - and Donald Trump is the only candidate with the experience and demonstrated success to make our government work for the American people. 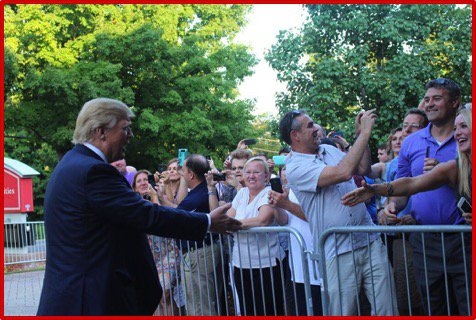 Americans of every party believe that our policies are the best and the only ones that can fix our nation’s problems. Voters around the country are all saying the same things:

“Trump has our best interests in mind, while other Republicans are looking out for themselves.”

"Trump is saying some of the things that we talk about around the kitchen table. We need the jobs here.

Last week Team Trump traveled to host a town hall in Derry, New Hampshire. Over 2,500 people crowded into the small auditorium to question Mr. Trump on his policies and vision for America. Our crowd was incredible - supportive, enthusiastic, and diverse. One journalist commented, “The large and diverse crowd reflected Mr. Trump’s broad appeal among Republican voters — young and old, men and women, rich and poor.”

This week we will be bring our message to voters in Iowa, South Carolina, Massachusetts, and Tennessee. We hope you are able to join us on the trail. If you are - let us know by mentioning @RealDonaldTrump and #TeamTrump. Let’s Make America Great Again!

Paid for by Donald J. Trump for President, Inc.