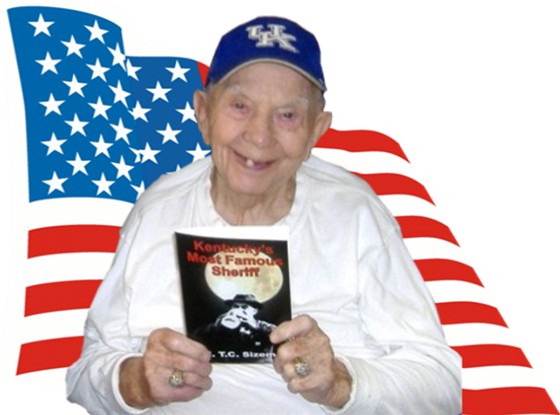 Thomas Curtis Sizemore saw action in the Western Pacific, under Gen. Douglas McArthur, during World War II. Subsequent to the war, Col. Sizemore ran for the office of sheriff, was elected and became famous for his campaign against moonshine traffickers in Clay County.

During his four years as High Sheriff of Clay County, Kentucky, T.C. made history by destroying more than 500 moonshine stills.

T.C.'s longtime neighbor and favorite caregiver, Mechelle Fair said "God has called a Special Angel to Heaven. Mr.T was a great person and very special to me, Col. T.C. will be dearly missed by countless friends, I loved him more than words can describe - Mr.T you have earned your WINGS!"

Pictured is Col. T.C. with his book "Kentucky's Most Famous Sheriff" published in 2013 by C & M Publishing.