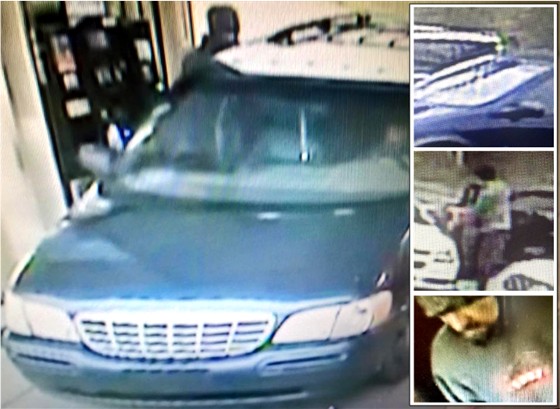 Corbin, KY - On Sunday, January 17, 2016, a pre-paid debit card was used to make a purchase at Murphy Oil USA near the Corbin Walmart.

The card was reported stolen from a vehicle parked outside Goldbug Baptist Church. That theft occurred approximately one hour before the card was used in Corbin.

Surveillance footage provided by the church shows two men exiting a dark blue van. The van (pictured below) is suspected to be a Chrysler Town and Country, although it also resembles the Chevrolet Venture. As shown in the attached picture, a van matching that description was present at Murphy Oil when the stolen debit card was used.

On the day of the theft, vehicles in the parking lots of two other Whitley County churches were targeted. It is believed all three incidents are connected to this van, and it is also suspected that the men in this van are responsible for a similar crime in Laurel County.

Anybody who recognizes this man or has any information about the law crimes is asked to please contact Whitley County E911 at (606) 549-6017. "The two men in the van from the church surveillance video need to be caught. This case gets to me, breaking into cars and stealing while families are in church. And for what? The records showed $30 in cigarettes is what the stolen debit card purchased. I'm asking the public to help identify the two men in the photos." - Sheriff Colan J. Harrell