Ever wonder how great things could and would be if more people respected the American flag, believed in the goodness of America, and practiced the traditional American values of "help your neighbor, support your friends, be there for your family, and love your country? "Ask not what your country can do for you; but what you can do for your country", John F. Kennedy.

This commentary is provided in an effort to explain my concern for our community and our country. All my life, beginning as a young boy and continuing into adulthood I have heard others exclaim "my vote don't count, my voice isn't heard, and nothing ever changes". 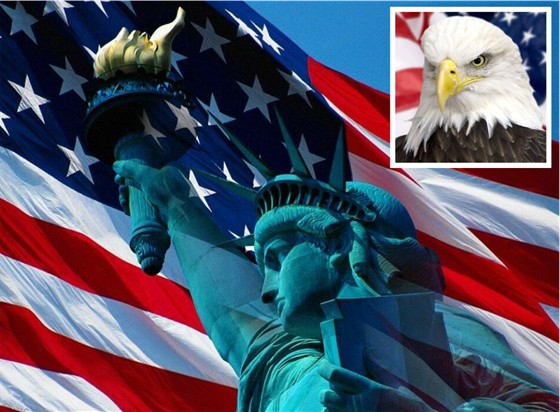 Three of our greatest symbols of FREEDOM
The "Stars & Srtipes", Statue of Liberty and the American Bald Eagle!

Well, in all reality that is a defeatist and negative attitude that is grounded in a lack of progress and a lived experience of most of our people in the mountains of Appalachia. I suggest to you that if you vote at EVERY election cycle that your voice will begin to be heard as your presence and participation or lack thereof is no longer taken for granted. "Concentrated power has always been the enemy of liberty", Ronald Reagan.

Have you ever heard the expression, the squeaky wheel gets the grease? Well, that expression is a good metaphor for explaining why some communities, counties, and states grow and prosper and why others are in decline and despair! Politicians are people who seek to hold office and to hold office they require votes and respond to voters for who they are accountable to, thus those who don't participate in the process are discounted, neglected, and rarely get attention paid. The natural inclination for people who are ignored and not given consideration is to become disaffected and disengaged, and thus apathy sets in and takes root. Apathy is a contagious mental phenomena that causes voter fatigue.

Every election result is determined by the people who show up, those who take the time, and those citizens who make the effort to have their vote counted, their voice heard, and their presence known. "Government of the people, by the people, and for the people shall not perish from the earth", Abraham Lincoln

You have a unique opportunity on Saturday, March 5 to become a part of history! The Republican Caucus for Clay County will convene at the EKU Manchester Campus beginning at 10:00 am and conclude at 4:00 pm.

For more information you can contact the Office of the Clay County Clerk.