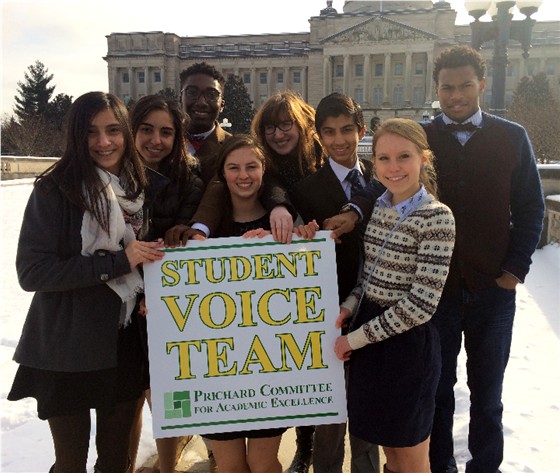 Legislative Team with SVT sign on Capitol steps in Frankfort

Ask most any high school senior what their biggest worry is, and they’ll tell you it’s affording college.
That shouldn’t come as a surprise; college tuition has ballooned at an unprecedented rate.
From 2008 to 2015, residential undergraduate tuition at four year institutions in Kentucky has increased by 44%, and tuition in the Kentucky Career and Technical College System has increased by 31%.

The rising costs of higher education make it hard for low-income students to further their education, a severe disadvantage in a job market that seems to frequently pass over individuals without bachelor’s or associate’s degrees.

Many turn to student loans. But rising costs couples with lack of aid leads to increased burden on student loans.  Last year, the average student loan debt for students at Kentucky public universities was $26,486, nearly double the annual salary of workers in minimum wage jobs. If such workers put every penny they earned for an entire year towards paying off their student loans, they would still be in debt—and that’s before interest.

This financial challenge makes college an impossible dream for many low-income students, particularly when need-based scholarships are so hard to come by in Kentucky.

Last year, 66% of the 62,200 qualifying low-income students were denied college scholarships due to a lack of funds. Of those, 15,000 to 20,000 could have received assistance had the need-based scholarships been funded at the statutory level. A lack of scholarship support for deserving Kentucky students from low-income background is a very real tripwire for some of Kentucky’s best and brightest as they seek to further their education.

Kentucky cannot afford for college affordability to be such a barrier.  Post-secondary education is critical, not just for students, but for everyone they touch. A more educated workforce makes for a more vibrant community, and a stronger, more competitive Kentucky economy. It also leads to increased tax revenue and fewer people dependent on entitlement programs. 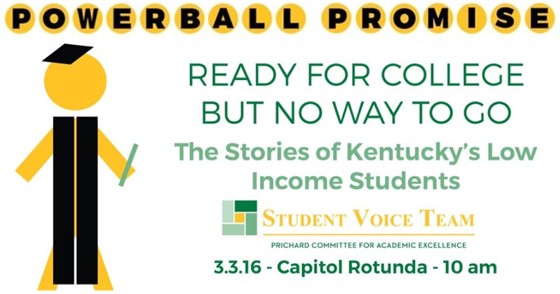 These truths are widely recognized by Kentucky’s youth, and this legislative session, thousands of young people are mobilizing around them.  Consider:

We all share a common concern: that college is becoming more and more out of reach. But we now have the opportunity to shift the momentum by creating public policy that makes both moral and economic sense.  In fact, we can do so by building on the spirit of public policy already in place.

Our #PowerballPromise campaign started as a way to call attention to the importance of the Kentucky Lottery proceeds supporting need-based college scholarships, but it has now expanded well beyond that.

It is about making college an attainable ambition rather than an impossible dream. It is about making access to higher education a reflection of initiative and a desire for self-improvement rather than parental income or a lucky zip code.  It is about showing the nation that the Commonwealth is serious about college affordability. And it is about taking a definitive first step in the right direction.