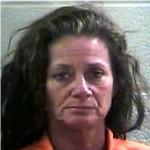 The arrest occurred off Keavy Road, approximately 5 miles south of London after deputies were dispatched to a domestic disturbance involving a firearm there.

In addition, the property owner stated that this subject began hitting her with a pistol in the head causing several cuts on her face, arms and hands. Deputies also determined that Melissa Houston was under the influence and found her subject in possession of a concealed firearm.

Melissa Houston was lodged in the Laurel County Detention Center.

Photo attached is courtesy of the Laurel County Detention Center.