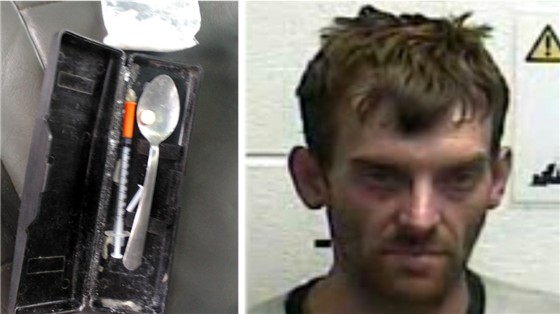 Whitley County, KY - The Whitley County Sheriff's Department is reporting that at around 4:00 p.m. May 8, 2016, Deputy Jonas Saunders responded to Bell’s Country Store after Whitley County E911 received a call about a man reportedly passed out in an SUV with children present.

Dep. Saunders arrived and found 29-year-old Derek Christopher Mills not alert behind the wheel of a Chevrolet Trailblazer.  In the SUV were two children under the age of 10.

Mills showed signs of being under the influence. Williamsburg Police Department K9 Officer Elijah Hunter responded, and his K9 alerted to the presence of illegal substances. A search of the vehicle revealed a crystal substance believed to be “ice” methamphetamine and drug paraphernalia, including a hypodermic needle, in the vehicle’s console.

Social services responded to ensure the safety of the children.

Photo of accused courtesy of the Whitley County Detention Center where he is currently lodged.