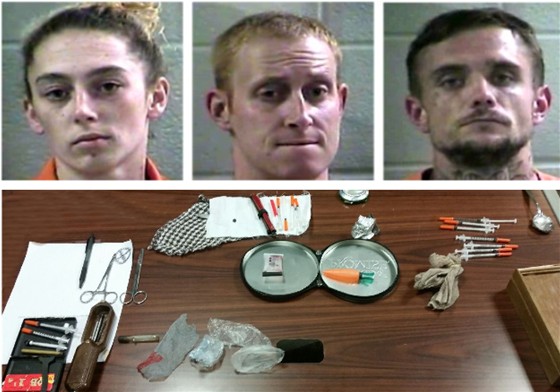 The arrests occurred after deputies were dispatched to conduct a welfare check on a two-year-old child there. When deputies arrived at the scene and conducted an investigation, they found the child with a grandmother and another female relative who were not in the apartment in question.

Deputies conducted a consent search on the apartment in question and found 16 needles, 4 meth pipes, two spoons with residue, and a pop can bottom containing residue that tested positive for methamphetamine.

All three individuals were charged with possession of drug paraphernalia. The three were lodged in the Laurel County Detention Center.

Photos of the three individuals arrested are courtesy of the Laurel County Detention Center.

A photo of paraphernalia seized is also included.