LEXINGTON, Ky. -- The Governor’s Medal of Valor was posthumously awarded to Cameron Ponder, a Kentucky State Trooper killed in the line of duty in 2015, at a ceremony held in Lexington on June 17.

L to R -  Kentucky State Police Commissioner Richard W. Sanders joined Gov. Matt Bevin as he presented the Governor's Medal of Valor to Brenda Tiffany, the mother of the late Tpr. Cameron Ponder, his fiancée, Chrystal Coleman, and his father, Joe Ponder at a ceremony held in Lexington on June 17.

The Governor’s Medal of Valor is the highest honor that can be bestowed upon an officer of the Kentucky State Police for conspicuous heroism in the line of duty under circumstances of extreme personal hazard. It is awarded only by order of the Governor. Including Trooper Ponder, 19 Kentucky State Troopers have been awarded the medal since 1973.

Ponder was 31 years old and had been a trooper for eight months when he was shot and killed on Sept. 13, 2015 during a late night traffic stop and pursuit in Lyon County. After an eight-hour search, the perpetrator was fatally wounded by the KSP Special Response Team after he refused commands to drop his weapon and pointed it at officers.

Ponder is the 30th Kentucky State Police officer to lose his life in the line of duty since the agency was established in 1948. 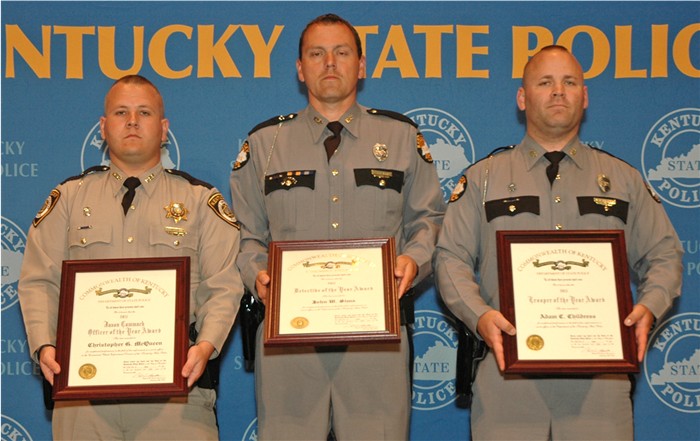 Trooper Adam C. Childress, a Somerset, Ky. resident, was named 2015 Trooper of the Year. A four-year veteran of the Kentucky State Police, he is assigned to KSP Post 11 in London. Prior to graduating from the KSP Academy in 2012, Childress served as a deputy with the Pulaski County Sheriff’s Office for 10 years. Childress is the son of Pete and Tracey Childress of Mount Vernon, Ky.

Detective John Sims, a Mayfield, Ky. resident, was named 2015 Detective of the Year. A 13-year veteran of the Kentucky State Police, he is assigned to KSP Post 1 in Mayfield. Sims is the son of Ted and Stephanie Sims of Paducah, Ky.

Officer Ralph W. Thompson, a resident of Frankfort and a 14-year veteran of the agency, was named 2015 Facilities Security Officer of the Year. Thompson is the son of the late James Thompson and June Thompson of Waco, Ky.

Eighteen troopers were awarded the KSP Citation for Bravery, an honor bestowed on officers of the agency who perform acts of bravery, without regard for personal risk despite clear and obvious peril, and clearly above and beyond the call or risk of ordinary duty.

Nine troopers were awarded the Citation for Meritorious Service with “V” Device for Valor, bestowed on officers of the agency who distinguish themselves by an act of courage performed under more than ordinary circumstances.

Seven troopers received the Citation for Meritorious Service, bestowed upon officers of the agency who distinguish themselves by an act of meritorious service of such exceptional character that it contributed to the success of a major command or endeavor.

Twenty-one troopers were named Detective of the Year at the post, branch or division level.

Seventeen troopers were named Trooper of the Year at the post, branch or division level.

Seven Commercial Vehicle Enforcement officers were named Officer of the Year at the regional level.

The 2015 KSP Safe Driving Awards, which recognize the KSP post and Commercial Vehicle Enforcement region with the highest average number of safe driving miles between assessable accidents, were presented to KSP Post 5 in Campbellsburg and CVE Region 4 in London.

Seven individuals received the KSP Citation for Meritorious Achievement, the agency’s highest civilian award bestowed upon those who performed an extraordinary act of service or heroism in direct support of an officer of the agency engaged in the official performance of duty.

For a listing of the individuals and officers who received these awards, visit http://www.kentuckystatepolice.org/2016/pr06_17_16.html