CVE Region 4 Officer of the Year 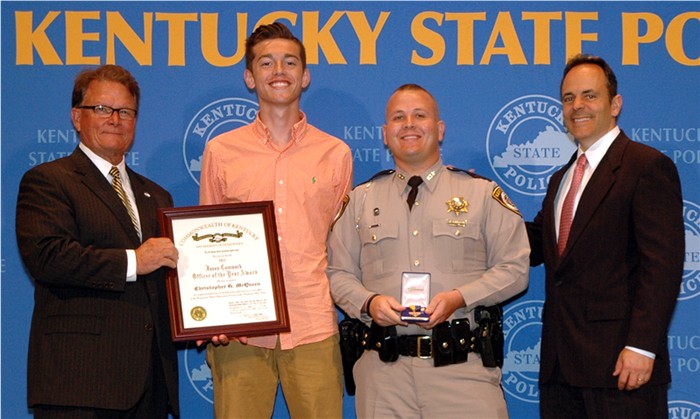 This award is in memory of Officer Jason Cammack, the only Kentucky Vehicle Enforcement Officer killed in the line of duty. Officer Cammack was killed on April 23rd 2000 as a result of an automobile crash while attempting to turn on a speeding vehicle.

McQueen was nominated for his high levels of activity and outstanding performance in law enforcement. In 2015, McQueen had the recovery of over one million dollars of stolen commercial vehicles and equipment that was used by the trucking and coal industry. That same case also led to the arrest of suspects wanted in a serious assault of a Kentucky State Trooper.

McQueen began his law enforcement career in 2005 with the Laurel County Sheriff’s Department and in 2007 he became a Commercial Vehicle Enforcement Inspector for the Kentucky State Police. In 2014 he was promoted to Officer where he is assigned to Laurel and Whitley Counties. A graduate of South Laurel High School and Somerset Community College he is the son of Mary Reed and Glenn McQueen of