Citizens complaints lead to eight subjects being jailed by LSO

The Laurel County Sheriff's Office developed information on the location of a fugitive wanted out of Florida on charges of selling/delivery of morphine.

On Monday morning June 27, 2016 at approximately 6 AM, Sheriff John Root along with Laurel Sheriff's Special Response Unit (SRU) led by Maj. Rodney Van Zant traveled to a location off Locust Grove Road, approximately 8 miles south of London where they located the individual wanted by the state of Florida along with two other individuals who were also wanted on outstanding warrants.

Sheriff John Root, LSO 's special response unit, and deputies then travel to a room at a local motel in southern Laurel County to investigate a drug complaint which led to three arrests on drug-related charges and an individual wanted on an outstanding warrant.

As the investigation continued, deputies located 2 other individuals in a different motel room and through investigation discovered a convicted felon in possession of a firearm – A 9 mm pistol. 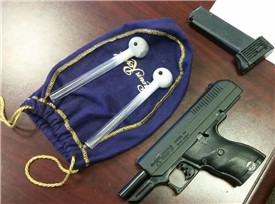 All eight individuals were lodged in the Laurel County Detention Center.

Photos of the accused and the seized 9 mm handgun and crack pipes were provided by the Laurel County Sheriff's Office.

Sheriff Root stated that drug investigations will be ongoing.