Manchester, KY - Elivia Marcum is a 12-year-old who visits residents at Laurel Creek Health Care Center  in Manchester, Kentucky, at least once a month to give them manicures.

That changed, however, and after her relative went home, Marcum wanted to continue visiting the residents. With the help of Tammy Lawson, who is a unit manager as well as Marcum’s aunt, she came up with the idea to give the residents manicures. 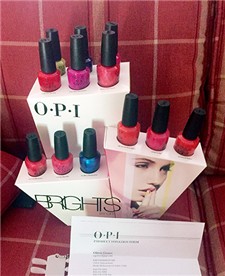 “Elivia will bring her polish and other things, and the ladies line up,” said Lawson. Recently, Marcum contacted a nail polish manufacturer and was given a display shelf with new bottles of nail polish. Her friends have named Marcum’s services “Polish me Pretty by Elivia.”

“People think a nursing home is a bad place,” said Marcum. “I now know it isn’t bad. I love seeing [the residents] smile when they see me. It’s crazy because I know most of their names, and it’s sort of like they are my family now too.”

Marcum has eight to 10 regular residents who look forward to seeing her.

“Elivia is the sweetest girl ever,” said resident Ethel Hensley. “I wish she could come every day. I love talking with her while she paints my nails.”