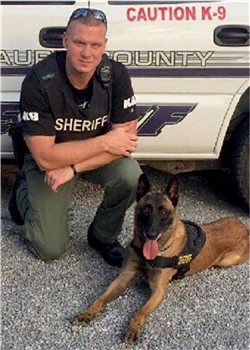 Laurel County, KY - Sheriff John Root is reporting that: The Laurel County Sheriff's Office has a new member on our team – K-9 Edge, a five-year-old Belgian Malinois, that was donated to LSO by Free Spirit Kennels operated by David and Cindy Cobb.

The fully trained, certified K–9 is valued at between $10,000 and $15,000. Edge's K – 9 handler is Deputy Daniel Grigsby. The week of October 10th, Deputy Grigsby and his K-9 Edge traveled to Cookeville, Tennessee to become certified as a K-9 team by NAPWDA (National American Police Work Dog Association). Following rigorous training, our K-9 team is now certified.

The team is now certified as a police utility dog which comprises the following areas: obedience, article search, area search, tracking, building search, and aggression control. In addition, the team is certified in drug and narcotic detection including: methamphetamine, heroin, cocaine, ecstasy, and marijuana.

Sheriff Root stated that "The K-9 addition is the first in several years and will play a vital role in our "War on Drugs". In addition, this K-9 team will be a vital part of the Sheriff's office, and is a valuable asset to the citizens of Laurel County. They will respond to calls for service and are a specialized team whose specific skills will be a critical asset to the Laurel County Sheriff's Office."