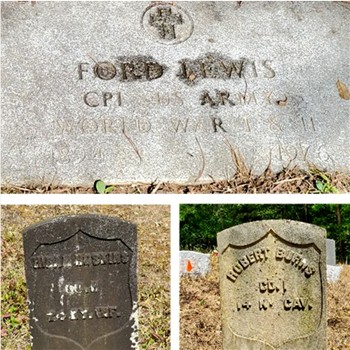 OP-ED: THE VETERANS IN THE HOSKINS CEMETERY SHOULD BE ALLOWED TO REST IN PEACE

In my opinion, the Veterans in the Hoskins Cemetery, which is over one hundred twenty-five (125) years old, should be allowed to Rest in Peace in the plots selected by them or their family members as their Final Resting Place. I am a retired Veteran with thirty seven (37) years of military service in the United States Army Medical Corp as a Combat Medic. I am the son of Ernest Christopher Peters, a Veteran of Korea and Vietnam, who retired with twenty-one (21) years of military service. As a member of the United States Army Medical Corp, I have seen death and have had extensive training on the proper handling disposition, transportation, and regulations regarding funeral and burial services.

It is the duty of the Military Funeral Escort to bring the soldier, sailor, airman, or Marine home to their Final Resting Place. It is believed in military tradition that this Final Resting Place is permanent and the grave is scared. In the case of my father, a Burial Detail was sent from the 101st Airborne. This was a full Burial Party, which included six (6) poll bearers, a bugler from the 101st Airborne Band to play taps, an Army Chaplain to conduct the Funeral Service, and a firing party to render a twenty- one (21) gun salute. Members of the Army's 101st Airborne Division were fully involved during my father's Funeral, including lowering the casket into the grave. My father was not buried in a National or Federal Cemetery or property owned by the Federal Government. His Final Resting Place is the Locus Grove Cemetery, Keavy, Kentucky, with the understanding and emphasis that his Final Resting Place is permanent.

Once a Veteran or the Veteran’s family chooses the Veteran’s Final Resting Place, as the phrase states, the Final Resting Place is final and permanent. Exhumation by the military is done only in extremely rare circumstance. The procedure for military exhumation can be found in the Library of Congress for the Army under the Army Mortuary Affairs Program. The other military branches would have similar publications there.

The primary purpose of exhumation in the military is for identification purposes. Prior to the advent of DNA testing, most identification was made through the use of dental records. After eighty (80) years, the remains of US. Navy Sailor Stanley Owsley, who served on the USS Oklahoma during the Battle of Pearl Harbor and who laid in a grave marked unknown, was brought home to Burnside, Kentucky, to his family and to a Final Resting Place that bears his name. U.S. Marines killed during the Battle of Iwo Jima were exhumed and brought home and laid to rest in U.S. Soil. Military personnel killed in the European Theater during World War I and World War II, when the next of kin could be notified, were given the option of having theie loved one buried in France or brought back to the United States. Most chose to let their loved one’s Final Resting Place be located in France.

During the aftermath of the Battle of the Little Big Horn, approximately two hundred and sixty-eight (268) members of the U.S. Army 7th Cavalry were killed. They were buried where they were killed. Only one (1) soldier from the Battle of the Little Big Horn was exhumed. It was George Armstrong Custer, who held the rank of Lieutenant Colonel in the United States Army at the time of his death but was posthumously promoted to the Rank of Major General, the Rank he held during the Civil War. General Custer's Final Resting Place is the United States Military Academy West Point, where he was a graduate.

I respectfully request strongly the Clay County Board of Education to respect the former members of the military buried in the Hoskins Cemetery and allow them to Rest in Peace as their final resting place as the phrase states is final!