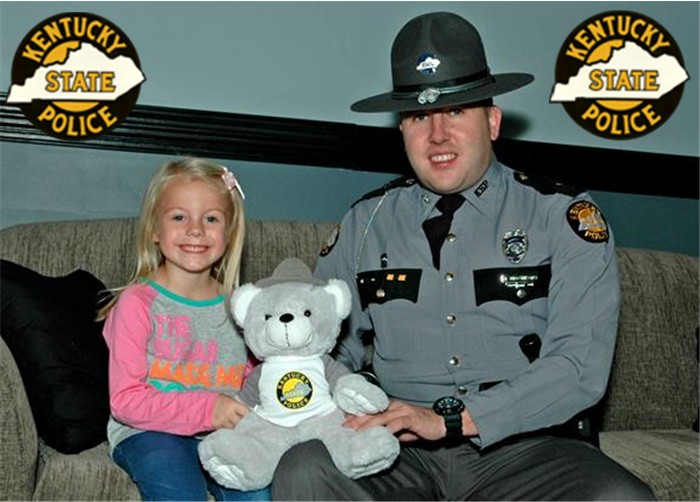 FRANKFORT, Ky. — When KSP troopers encounter young children, it is often due to a traumatic situation such as a car crash, exposure to drugs, or domestic abuse cases that frequently result in the arrest of a parent. KSP hopes their ‘Trooper Teddy’ bears will serve as a tool to calm innocent children found in these circumstances.

“When KSP is called to a scene, it’s usually a tragic and difficult situation,” said KSP spokesman Lieutenant Michael Webb. “Unfortunately, there are many incidents where children are involved and witness traumatic things. To minimize the situation and help them cope, we will be able to provide children with a teddy bear to calm them down during times of crisis.”

KSP Commissioner Rick Sanders said the program is designed to develop trust between officers and children.

“As a law enforcement officer, it tugs at your heart strings to arrive at a scene and see a child visibly upset and shaken,” said Sanders. “These children are often innocent victims of parents who may have violated the law, or in the middle of a domestic disturbance, or worse. This small gesture provides comfort and builds trust between the officer and the child.”

Webb said the ‘Trooper Teddy’ program has been around since 1989 but ran out of funding in recent years.

“Like many agencies, KSP didn’t have the funds in our budget to purchase the bears, but the need has remained,” Webb said.

KSP was able to utilize asset forfeiture funds from seized assets in drug investigations to fund the purchase of the bears.

“Money previously used to destroy lives will now be used to help repair lives. There is nothing better than using seized drug dealer money to buy teddy bears for kids in crisis,” added Webb.

The Asset Forfeiture Program is a nationwide law enforcement initiative to seize and forfeit proceeds from federal crimes or property that was used to facilitate federal crimes. The funds are restricted and can be used for qualifying expenditures toward enhancing public safety and security.

Each KSP post will receive a supply of bears that will be distributed to road Troopers who arrive first on the scene of critical incidents.