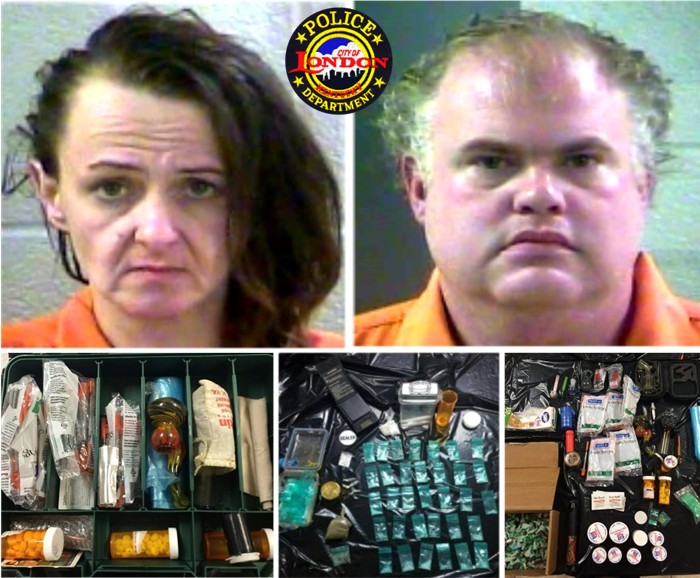 LONDON KY - The London Police Department is reporting that: On Saturday, Dec. 11 at 12:36 a.m. London Police responded to a complaint from Wal-Mart on KY-192 about a vehicle that was broken into.

Through investigation, two were arrested, 20 grams of methamphetamine were discovered, marijuana, and various items used for drug usage and distribution.

Ofc. Daryl Zanet was the first to arrive at the scene and while investigating a single vehicle that had been broken into with a wallet stolen; he discovered a second vehicle had also been broken into. Ofc. Zanet viewed surveillance footage and obtained the suspect’s vehicle description, a black Subaru Outback. Sgt. Eric Wilkerson and Ofc. Steven Sparks then arrived at the scene to assist.

They discovered the Outback within Wal-Mart’s parking lot and made contact with Kimberly M. Hacker, 43, of McKee, Ky. who fit the description of the accused. Within plain sight inside the vehicle were items that were stolen from the vehicles that were broken into. Police discovered that Hacker had four warrants out for her arrest and she admitted to taking the items.

Also inside the vehicle was Vernon F. Adkins, 40, of McKee, Ky. who was in possession of a large quantity of drugs and drug paraphernalia. Police found approximately 20 grams of meth in 35 individual baggies, over 10 grams of marijuana, over 2,000 empty baggies, 12 smoking pipes, pill and marijuana grinders, several knives, and other items from drug usage and distribution.

Adkins was arrested and charged with first-degree trafficking in a controlled substance, buying/possessing drug paraphernalia, and possession of marijuana.

Both were lodged in the Laurel County Detention Center.