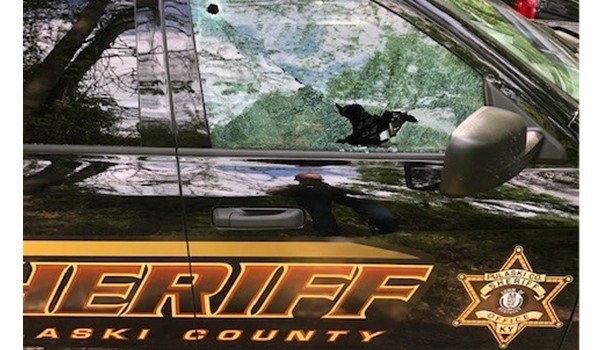 SCIENCE HILL, KY (May 20, 2020) - The Kentucky State Police, London Post was notified on Monday, May 18, 2020 shortly before 10:45 AM by the Pulaski County Sheriff’s Office for assistance involving a shooting at a residence on Smith Ridge Spur Road in Pulaski County.

When the sheriff’s office arrived on the scene, the vehicle was hit by gunfire, at which time shots were exchanged, and the alleged shooter barricaded himself inside the residence.

As a result of the officer involved shooting, the Pulaski County Sheriff’s Office requested that KSP investigate the incident, and attempt to apprehend the barricaded suspect.  KSP Post 11 and the Special Response Team responded to the scene, and while attempting negotiations KSP was confronted by the armed suspect, at which time shots were fired injuring the suspect.

Charles Wilson, 51, was taken into custody and transported to the University of Kentucky Albert B. Chandler Hospital with life-threatening injuries.

The victim of the initial shooting, whose information is not being released, was taken to Lake Cumberland Regional Hospital with non-life-threatening injuries.

This is an ongoing investigation led by KSP Post 11 and the Critical Incident Response Team.