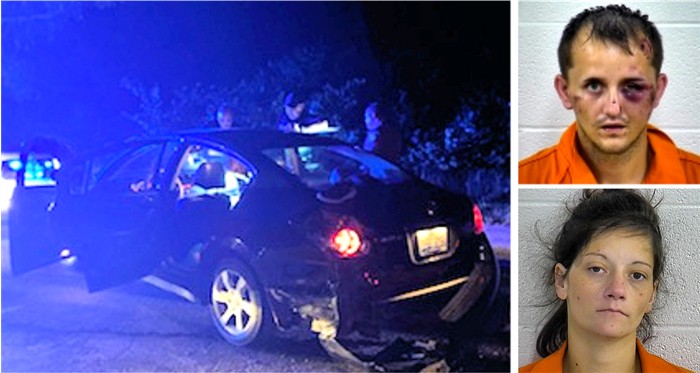 The arrest occurred on Rockcastle River Forestry Road (off Ky 490) approximately 9 miles north of London following a 90 minute four County pursuit that began at a business off KY 909 following a complaint of subjects possibly under the influence and creating a disturbance there.

When deputies arrived at the scene, they encountered subjects seated in a dark blue Nissan Altima. Upon approaching the vehicle, the driver recklessly pulled out of the parking lot, and as the vehicle entered I–75 Northbound, the vehicle slowed and a female passenger exited the vehicle.

The vehicle traveled northbound on I–75 at speeds exceeding 100 mph swerving across all lanes of travel, braking, and recklessly passing other motorists traveling into Rockcastle County, Madison County, Jackson County, back into Rockcastle County and finally onto KY 490 back into Laurel County where Deputy Houston utilized a pit maneuver causing the vehicle to stop safely.

The driver tried to exit the vehicle to flee on foot but was taken into custody following a brief struggle with deputies there.

Only Deputy Houston’s cruiser (left) and the suspect vehicle were damaged.

Through investigation deputies learned that the driver and passenger had attempted to inject heroin as the pursuit began.

During arrest the driver was found in possession of:

The driver was determined to be under the influence.

In addition, the driver was wanted on an outstanding warrant.

Nicholas Denny was charged with:

In addition, this subject was wanted on a Rockcastle Circuit Court bench warrant of arrest charging:

A female passenger in the vehicle at the onset of the pursuit was identified as:

Also crime scene photos are attached to this report.