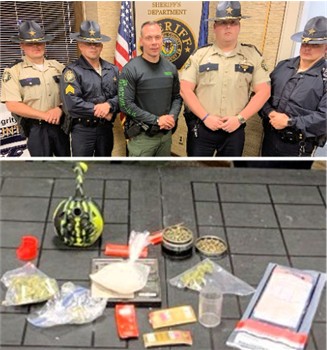 The arrest occurred on Monument Lane in London after Laurel Sheriff's Deputy Landry Collett observed a vehicle weaving on the roadway and conducted a traffic stop.

During the stop, Deputy Collett detected the strong odor of Marijuana emitting from the vehicle. Additional deputies arrived at the scene to assist on the investigation and a large amount of suspected Methamphetamine (approx. 49 grams) was discovered along with digital scales and Marijuana.

Deputies noted that they found some drugs between two children in the backseat of the vehicle.

Three total children were in the vehicle whose age was 2 years, 13 years, and 14 years.

Amber Lee May was charged with: