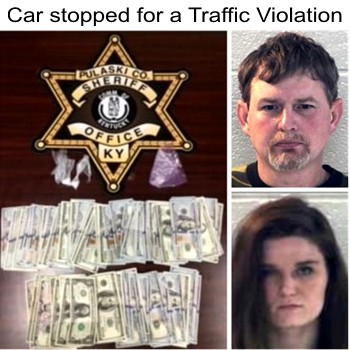 Jackson County Woman Passenger in Vehicle that Illegal Drugs & Cash Found and Seized from Driver by Police in Somerset, Kentucky

Eric Nicholas was the driver of the car, he also had a female passenger in the car with him.

Deputy Patterson arrested the driver, Eric Nicholas, age 48, of Pond Meadow Road, Somerset, Kentucky following the traffic stop where suspected illegal drugs and cash were found and seized from him.

Located all on the person of Mr. Nicholas during the investigation by Deputy Patterson was:

Eric Nicholas was charged with the following:

Mr. Nicholas has a prior criminal history of:

Eric Nicholas remains lodged in the Pulaski County Detention Center as of this press release.

The case remains under investigation by Deputy Branson Patterson. He was assisted by Sergeant Steven Alexander, Deputy Alex Wesley, and KSP.

Autumn Decker was charged by Deputy Alex Wesley with:

This individual was lodged in the Pulaski County Detention Center and released just after 1:00 AM on the 8th.

Sheriff Greg Speck (left) asked if you have any information about drug activity or any crime to contact our tip line at 606-679-8477.

You can remain anonymous.

You can also leave a tip on our webpage PulaskiSheriff.com .