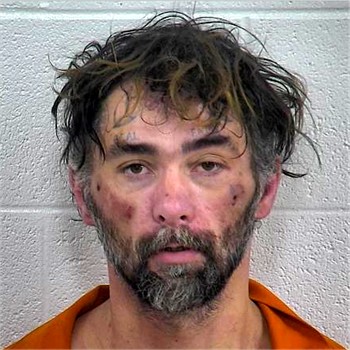 The arrest occurred off US 25 approximately 8 miles South of London after deputies were dispatched to a possible overdose at a business there. Upon pulling into the business parking lot, deputies observed a male subject flee on foot when he saw the patrol car pulled into the parking lot.

After a foot chase the individual was questioned and gave false identifying information to deputies (his fathers info). Deputies were able to determine the correct identification of this  individual.

In addition, during arrest the individual was found in possession of suspected Methamphetamine, hypodermic needles, and a flask.

While being processed at the Sheriff's office this subject attempted to interfere with custody and following a brief scuffle with deputies was taken into custody.

In addition, this individual was charged on four Whitley District Court warrants of arrest obtained by Corbin police officer Stephen Meadors after Officer Meadors attempted a traffic stop on a rental vehicle when allegedly this individual who was an occupant in the vehicle shoved the female driver out of the moving vehicle and drove off and following a vehicle chase and a foot chase discarded suspected Methamphetamine, and was in possession of a rental vehicle belonging to the driver who stated this individual had entered her vehicle without permission while stopped at a local business.