David & Goliath Feud Continues in Clay County, Kentucky Between Citizens and School Board with Controversial Presentations to Fiscal Court Regarding the Boards Attempt to Relocate a Historical Cemetery Dating Back to 1893 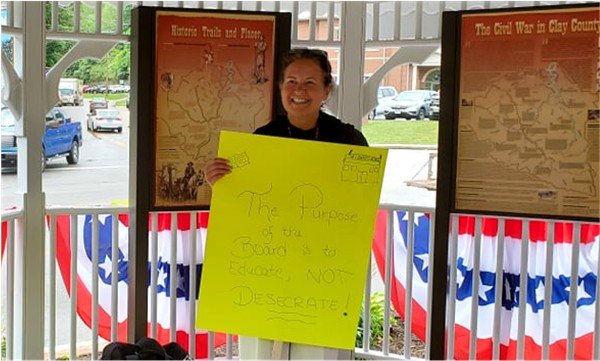 This afternoon, Clay County Judge Executive Johnny Johnson confirmed that a special meeting has been scheduled by CCBOE with the Clay County Fiscal Court for the presentation of this Petition on this coming Wednesday, July 14, 2021, at 9:00 A.M., EST, at the Clay County Administration building in downtown Manchester.

Representatives of the friends of the Hoskins Cemetery plan to be present at this meeting.

Before the meeting on July 8, 2021, there was a peaceful protest in which a group of individuals marched from downtown Manchester to the CCBOE’s offices. Protesters could be heard chanting "Educate Don't Desecrate", " Let Our Dead Rest", "Save Hoskins Cemetery" and "Protect Sacred Graves".

Family members from as far away as Saint Cloud, Florida, traveled to Manchester to participate in the protest and attend the court meeting.

During the meeting, the CCBOE’s Attorney Sharon Allen referred to the Hoskins Cemetery as a "Sniper's Nest", in an effort to gain permission from the Clay County Fiscal Court to flatten the 128 year old cemetery and relocate it.

Contrary to former statements the CCBOE now claims it is not requesting to move the cemetery to build a ball field or for other athletic expansions. The CCBOE is now requesting to move the Hoskins Cemetery for no good reason at all and is alleging bogus safety concerns. In my opinion, it was very irresponsible for the CCBOE to make a safety issue out of a non-safety issue.

A former employee of the CCBOE, who recently retired and wishes to remain anonymous but worked on the grants for the new Clay County Vocational Center, stated to me on June 14, 2021, that the the Hoskins Cemetery would become new athletic fields. It was the former employee's understanding the the Hoskins Cemetery would be cleared and flattened for a project improving the athletic facilities. The former CCBOE employee also stated that moving a cemetery is a questionable plan.

Another nameless employee of the CCBOE stated to Gordon Miller and I on June 25, 2021, that the Hoskins Cemetery would be flattened for a new parking lot for the athletic facilities.

In addition, three different individuals, Debbie Bray, Barbara Ann Finley and Alma Finley, who have ancestors buried in the Hoskins Cemetery, have stated they talked at different times in the month of June, 2021, to Clay County School Board Member Mark Hoskins, and he told them the Hoskins Cemetery was being relocated for a ball field. Alma Finley states she specifically asked him was there no other location that could be used for the construction of a ball field and claims Hoskins told her “no”.

Very interesting to say the least how one board member and two employees of the CCBOE confirmed athletic expansion plans, but at the Clay County Fiscal Court meeting suddenly the plans shifted to the bogus safety concerns.

Another important point to mention about Thursday's Fiscal Court meeting, CCBOE attorney Sharon Allen basically ridiculed the petition that over 2,000 individuals have signed in an effort to stop the relocation. Allen stated the petition was signed by only 28 percent of actual Clay County, Kentucky, residents. She implied that Clay County, Kentucky, residents were basically not in favor of saving the cemetery. When considering this outrageous train of thought does she not think about or realize that individuals can be Clay County natives but have moved from the area at some point?

Many of the people who have signed the petition from out of Clay County and the State of Kentucky have family buried there and many people are interested in genealogy and preserving history.

Something to ponder on: Allen's statement of 28 percent of signers on the petition were Clay Countians, therefore using 1500 as an example and assuming all the Clay Countians that signed are voters that is 420 people, if you factor in all the families they represent in a county with a population estimated to be under 20,000 and all the underage population it's pretty obvious that nearly the entire county is in opposition to the CCBOE’s relocation plan. And then, add to that the other 72 percent from all over the United States with an interest in this unholy situation.

In considering how the Hoskins Cemetery being nearby Manchester Elementary in Sharon Allen's eyes is a "Sniper's Nest", I imagine she hasn't thought about the "B.F. White Cemetery" across the road from Clay County Middle School, near the Manchester City Hall building (that was formerly the Campbell-Reed Learning Center). Or how overlooking the Oneida Baptist Institute (“OBI”) at the Oneida area of Clay County, Kentucky, is the "Oneida Cemetery." OBI even recognizes the mountain holding the Oneida Cemetery as being "Cemetery Ridge", and there is even a trail from OBI’s campus leading to the entrance of the cemetery!

This 128 year old cemetery existed long before the current Manchester Elementary or Clay County High School was even a thought. One can't help but wonder why the CCBOE was never concerned about safety issues previously. The CCBOE always knew the cemetery was adjoining its property. The CCBOE purchased surrounding properties in 2008 as well as in 2019. So, why was safety issues not addressed back then at those points of sale?

One can only hope this bogus farce from the CCBOE in attempting to relocate the approximately 80 graves in the Hoskins Cemetery can someway be stopped. Please contact your Magistrate immediately and ask him to vote “no” on this proposal and stop this ludicrous plan now.