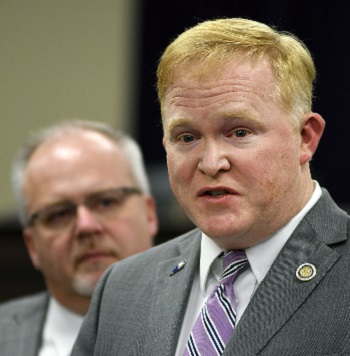 FRANKFORT, KY— As the Kentucky House of Representatives considers legislation to legalize sports betting, a different type of gaming industry may soon be prohibited in the Commonwealth.

Rep. Killian Timoney, R-Lexington, who serves as the primary sponsor of House Bill 608, says the bill would amend statute to prohibit gambling machines that are not associated with the Kentucky Lottery, charitable gaming or historical horse racing. He presented the bill to the House Licensing, Occupations and Administrative Regulations Committee on Tuesday.

Timoney said HB 608 would prohibit “gray machines,” or skill game machines, from operating in Kentucky. Currently, gray machines are not regulated by statute, and some lawmakers and legal experts question their legality.

“We’re asking (for this bill) especially for the families who don’t want gaming machines environments that are not age controlled, or even want them at all,” Timoney said. “This bill was not an easy bill to bring forward…. However we must stick to our principles.”

HB 608 would also require Kentucky State Police to establish a taskforce dedicated to the removal of gambling devices not authorized by law as well as instruct the Justice and Public Safety Cabinet to establish administrative regulations and reporting requirements.

Timoney was joined by Mary Harville, CEO of the Kentucky Lottery Corp., and Madge Vail, vice president of compliance and regulatory affairs for Lancaster Bingo Company, in testifying in favor of HB 608 and against gray machines.

Harville said the Kentucky Lottery funds college scholarships, and those funds are already in jeopardy due to the rise of skill games in counties across the Commonwealth. Skill games machines are typically located at gas stations and conveniences stores, which are popular Kentucky Lottery retail locations.

“Gray machines target those very same locations, and that is why unregulated gaming machines are a massive body blow to the Kentucky Lottery,” Harville said. “… At the end of quarter two, we looked at our statewide lottery sales. Stores with gray machines are lagging behind the others, about 5.5%.”

Harville testified the lottery is expected to lose $60 million annually if the General Assembly does not take action on gray machines. Vail also reported the charitable gaming industry is set to lose millions of dollars, which would hurt charitable causes like veterans clubs, humane societies, churches and volunteer fire departments.

Lobbyists and other representatives of the skill games industry testified the machines are legal and self-regulated.

Rep. Kim Banta, R-Ft. Mitchell, made a motion to consider a committee substitute to amend the bill to include regulations for gray machines instead of banning them all together.

Bob Heleringer, a former state representative who is now a lobbyist for skill games company Prominent Technologies LLC, testified in favor of the committee substitute. He said HB 608 in its current form has “constitutional issues” and is “not pro-business.”

“(The committee substitute) does not run out a legitimate business in the state that has come in here and has invested in businesses all over this state,” Heleringer said, adding that amending the bill would establish a tax that will benefit the state and a fund for first responders.

Banta’s committee substitute on the bill failed by a voice vote.

Rep. Al Gentry, D-Louisville, said while he supports gaming in Kentucky and supports legalizing and regulating gray machines, he believes more work needs to be done before that can happen.

“I don’t really support 608, and with this committee sub now it’s put me in a really tough situation,” Gentry said. “I don’t have the information in front of me to make a logical decision.”

Gentry ultimately voted “no” on the bill and expressed regret that he could not support the committee substitute.

Majority Whip Chad McCoy, R-Bardstown, voted “yes” on HB 608, and said “I think the folks that testified have raised a lot of things that we need to look into.”

HB 608 cleared the House Licensing, Occupations and Administrative Regulations Committee on an 11-3 vote with four passes. It will now go before the full House for consideration.

Photo: Rep. Killian Timoney, R-Lexington speaking about House Bill 608 at a press conference on gaming in Kentucky on Feb. 28. Timoney testified on HB 608 at the House Licensing, Occupations and Administrative Regulations Committee meeting on Wednesday.