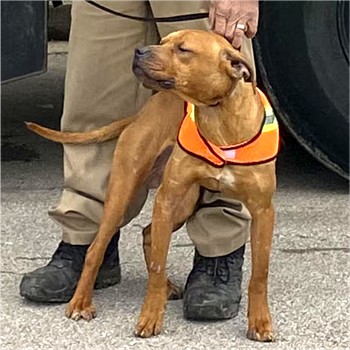 Oscar is estimated to be two-years-old and is now available for adoption.

LEXINGTON, KY - On February 6, 2022 Lexington-Fayette Animal Care & Control received a call about a loose dog on Whitney Avenue. But when officers responded to the call, there was no dog to be found. That is until another call came in saying the dog was inside of a tipped-over trash can.

“I went back out there and saw him in there,” said Jai Hamilton, who is a cruelty investigator. “It was really adorable because a lot of times dogs get scared and they run back to their house. But this dog, obviously, found safety in the trash can. He warmed up pretty quickly to treats and baby talk. But I brought him in and nobody came forward.”

Because of his love for trash cans, the Pit Bull Mix was named ‘Oscar’ after the famous Muppet character Oscar the Grouch. Hamilton said it’s rare for dogs to run around as strays for long in Lexington because their staff of 10 to 15 officers takes care of calls, but she doesn’t believe Oscar was treated well in his life before being found.

“He definitely looked neglected,” Hamilton said. “He was very, very thin. He’s got scarring on him, old scars. I don’t think he was treated well.”

Hamilton fostered Oscar in her office until his time as a stray ended. Oscar’s love for trash cans did not fade during this time. He continued to get into trash cans and “guard the trash.” Hamilton reached out to a contact at sanitation and took Oscar there for a day out. Oscar hung out in a sanitation truck and posed for pictures in his vest.

Oscar was transferred to the Lexington Humane Society on Feb. 11 when his time as a stray came to an end. He passed his evaluation period and is now available for adoption. Oscar is estimated to be two-years-old.

“He is timid, but he’s very sweet,” Hamilton said. “He’s not shown any aggression to anyone from the shelter or any other animals. He’s just shy. He doesn’t know how to be a dog. He’s learning.”

Anyone wishing to adopt Oscar can visit him at the Lexington Humane Society, located at 1600 Old Frankfort Pike, Lexington, Ky., 40504. More information on Oscar can be found on the LHS's website.

"FROM TRASH TO TREASURE" For more photos of Oscar click HERE 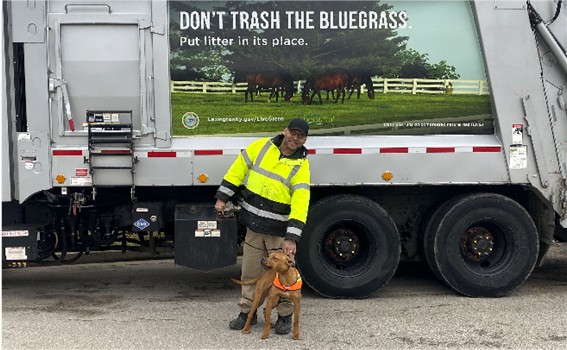