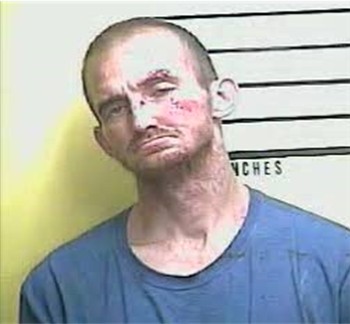 PINEVILLE, KY - The Bell County Sheriff's Department is reporting that on Wednesday, March 16, 2022, an individual on a motorcycle identified as 32-year-old James Rice of Arjay, Kentucky was seen on Highway 66 with an expired registration by Bell County K-9 Sgt. Adam Southern.

The sergeant initiated a traffic stop and during the incident Rice continuously attempted to reach into his pockets.

A safety pat down was conducted and Sgt. Southern observed a syringe and small bag of a crystal-like substance believed to be Methamphetamine sticking out of Rice’s left pant pocket.

As Sgt. Southern attempted to retrieve the items, Rice fled the scene for approximately 300 yards and then jumped in a creek swimming across to and entering a home in the area.

The deputy, assisted by Sgt. Frank Foster, and Chaplain Rick Dorton, then traveled to the residence where Rice was seen looking out the front storm door.

Rice then ran through the house jumping out the back door when he was seen putting a bag of a substance in his mouth and he jumped over the porch rail.

Rice was ordered to the ground which he refused and multiple attempts with taser deployments failed to stop him.

To gain control of Rice, physical force was used in an attempt to bring him to the ground. Rice then began punching all the deputies and at one point disarmed Sgt. Foster of his taser and attempted to use it on them.

After the struggle Rice was taken into custody without further incident.

The syringe and bags of the crystal-like substance were also located.

He was taken to the Pineville Community Health Center to be treated for injuries sustained in the incident.

James Rice was then lodged in the Bell County Detention Center charged with: