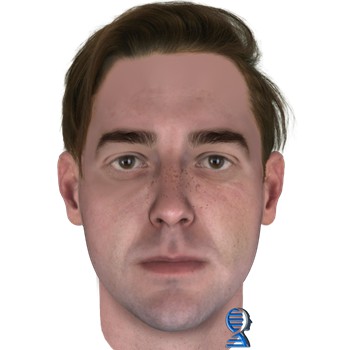 Please note: The name of the identified decedent is being kept private at the request of family members.

HOOD RIVER COUNTY, OR - The Oregon State Police is reporting that: On December 24, 2009, the remains of a skeletonized human body were discovered by children playing in a wooded area west of an Oregon Department of Transportation gravel storage facility in Hood River County, Oregon. Law enforcement responded and recovered the almost-complete skeleton of a male individual, a large suitcase full of clothing, and a small backpack with toiletries.  No identification for the deceased was found within these items.

An examination of the body determined that the decedent was most likely a Caucasian male, between 30 and 50 years of age at the time of death, around 5’9” in living stature.  All teeth were recovered; dental charting and x-rays were created; in 2011, the Oregon State Medical Examiner’s Office uploaded the case into the National Missing and Unidentified Person System (NamUs) and submitted a bone sample to the University of North Texas Center for Human Identification. A DNA profile was processed, completed, and uploaded into the CODIS database at that time. Unfortunately, no genetic associations to missing persons or family reference standards in the CODIS database were found.  The DNA profile continued to be searched against the national database, with no resolutions.

In 2018, the Oregon State Police Medical Examiner’s Office was awarded a federal grant to perform innovative DNA techniques on unsolved unidentified skeletal remains cases.  This case was recognized as one that could potentially be resolved by DNA Phenotyping and Investigative Genetic Genealogy provided by OSP’s vendor lab, Parabon NanoLabs (“Parabon”).

The existing extract from the University of North Texas was shipped to Parabon in March 2021 and an SNP DNA profile was successfully generated.

Parabon was first asked to perform a Snapshot®Advanced DNA Phenotyping analysis. DNA Phenotyping is a technology that analyzes an SNP DNA profile and predicts eye color, hair color, skin color, freckling, the shape of the face, and biogeographic ancestry of the DNA contributor. In this case, Parabon predicted the deceased individual was of Northern European descent, with very fair skin, hazel or brown eyes, dark brown hair, and likely had “some” freckling of the skin during life.  This information, along with the image that accompanied the report, was immediately uploaded onto the NamUs website to be used for missing person comparison purposes.

Investigative genetic genealogy (IGG) is a lead generation tool that is used to identify human remains by tying DNA from those remains to a family with a missing person.  It is also used in perpetrator cases to point to the likely identity of an individual whose DNA was found at a crime scene. Identification of a person is accomplished through the use of comparative DNA analysis, which measures the amount of DNA that is shared between two people, combined with traditional genealogy research using historical records to infer relationships between individuals.

The investigative genetic genealogy report authored by Parabon NanoLabs and released in June 2021 immediately provided an abundance of compelling information and the strongest investigative lead yet in this 13-year-old cold case.  The report strongly suggested that, after discovering genetic connections through both of his parents’ family trees, the decedent was a man who had been reported missing in 2008 from the east coast (his name is being kept private out of respect for the family).

The Oregon State Medical Examiner’s Office had already successfully coded and x-rayed all the dental characteristics of this decedent, so a request to compare the antemortem dental records of the missing person to the decedent found in Oregon was made.  The charting comparison by the Oregon State Forensic Odontologist proved that the remains were consistent with the dental records of the missing man.

Based on the totality of the genetic information and the consistency between the dental charts, the Oregon State Medical Examiner’s Office confirmed the positive identification in July of 2021.

In August of 2021, Hood River County approached the family with this sad resolution and received a startling response; the family was unconvinced that the body discovered in Oregon state was that of their missing loved one.

Renowned Parabon Chief Genetic Genealogist CeCe Moore set out to explain the complicated and nuanced genealogy report to the missing man’s family. Although she made a full-fledged effort to convince them, the family requested additional evidence to support the identification.  The decision was made to provide further DNA testing to substantiate the genetic link, and an oral swab from a sibling of the missing man was requested for kinship inference analysis.

The Kinship Inference report authored by Parabon NanoLabs in March 2022 was definitive.  It stated, “A sample from the kinship tester was compared to the unknown Subject in this case, and they were found to share 2745.9 centimorgans [1] of autosomal DNA (atDNA) with 630.6 centimorgans of the shared DNA fully identical, and 57.5 cM of X-Chromosome DNA (X-DNA)…This amount and type of shared DNA is exclusively consistent with a full (sibling) relationship.”

There are only 2 known biological offspring in this family, and no other male children are known to have been born to the parents identified in the genetic genealogy report.  The unidentified body was therefore identified again as the man reported missing in 2008 from the east coast.

"My colleagues and I are grateful for the opportunity to help identify this individual and assist in providing some resolution to his family.  As always, we are inspired by the tireless dedication of Dr. Nici Vance, her colleagues at OSP, and the Hood River detectives, who never gave up on this case. The fact that this case has been resolved is directly attributable to their determination and willingness to adopt new investigative technologies and techniques”, said CeCe Moore.

The Hood River County Sheriff’s Office and the Oregon State Medical Examiner’s office have now collaborated with the family; the body was successfully released to the funeral home of their choice in April 2022.

This case represents the nuances and sad realities of cold case investigations, and the fact that Oregon’s efforts reach nationwide.  Sometimes family members are hesitant, skeptical, or downright unconvinced of identification, especially after time has elapsed from months to years, to decades.  In addition, new DNA technology can be daunting and difficult to explain for those of us now exploring these new techniques.  Grant funding has allowed the Oregon State Medical Examiner’s Office to provide extensive DNA testing confirmation, proving that OSP is willing to go above and beyond to provide answers for families of the missing.

“The Oregon State Medical Examiner’s Office is lucky and honored to have diligent, compassionate, and knowledgeable colleagues in Parabon NanoLabs and genetic genealogists like CeCe Moore, who assist us and our partner agencies in any way they can to resolve cases. We continue to be so grateful for the opportunity to work with Parabon on our cold unidentified person cases.”  Dr. Nici Vance, State Forensic Anthropologist, and Human Identification Program Coordinator.

[1] A centimorgan is a unit used to measure genetic linkage.  One centimorgan translates to approximately one million base pairs of DNA sequence in the human genome.  The higher the number of centimorgans, the closer the relatedness the oral swab donor is to the deceased subject.