THE DEADLINE TO FILE YOUR ANNUAL BUSINESS REPORT IS JUNE 30

The 2022 General Assembly was another great session for Kentucky voters.

House Bill 564 and Senate Bill 216 passed with bipartisan support, as did House Bill 1, the state budget. Together, they will improve both voter access and election security.

It takes 15,000 poll workers to run an election in Kentucky. There is still time to volunteer to serve as a poll worker for the upcoming Primary Election. We’ve removed the partisan barrier for serving as a poll worker, allowing the more than 300,000 Kentuckians not registered as Democrats or Republicans to volunteer.  Sign up here. 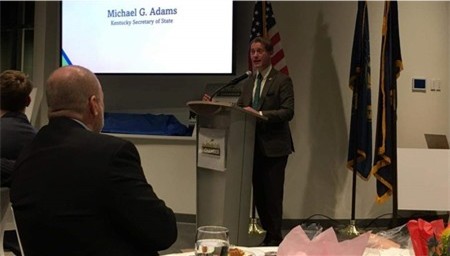 We are working to make conducting business in the Commonwealth easier. We continue to improve the online business registration site. You’ll see more improvements in the coming months. 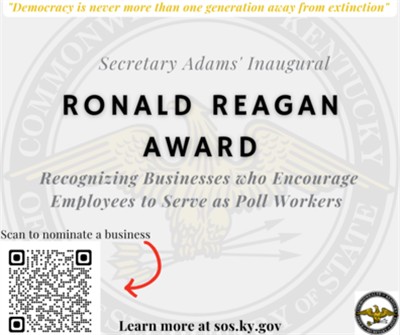 President Reagan said “Freedom is never more than one generation away from extinction.”. The same is true of democracy. We can’t have an election without election workers. That’s why we launched the Ronald Reagan Award Program to encourage the private sector to help us open the polls.

To qualify for the award, nominees must be a Kentucky business in good standing and promote poll worker recruitment by offering paid time off to volunteer as a poll worker, or other incentives such as bonuses or additional days off.

You can learn more about the award and the nomination process here.

Kentuckians will head to the polls again soon to vote in the primary election. All 6 of our U.S. House of Representatives seats, 1 U.S. Senate seat, all state House seats, half of state Senate seats, many judicial seats, and local candidates will be on the ballot.

Voting has never been as accessible, nor as secure, as it has been in Secretary Adams’ term of office.