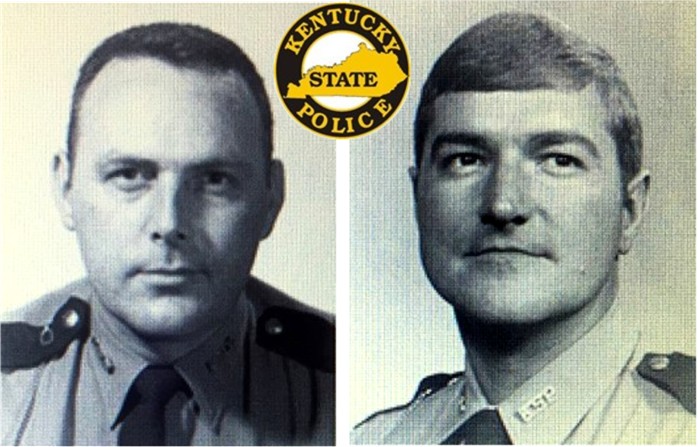 Trooper Elmer Mobley, JR, age 33, was fatally injured May 28, 1964, in an automobile accident while responding to a call for assistance in Pike County. Trooper Cecil W. Uzzle, who was accompanying Trooper Mobley, was also killed in the accident when their vehicle struck large rocks that had fallen in the roadway and was hidden by heavy rain and dense fog. Trooper Mobley was assigned to Post 9 Pikeville and had served with the Kentucky State Police as a Trooper for four-and –a half years.

Trooper Mobley is buried in the Oneida Settlement School Cemetery in Clay County, Ky. In honor of his service and sacrifice, the Wild Cat Creek Bridge at mile marker 15.589, on Kentucky Highway 11 in Clay County, has been designated the "Trooper Elmer Mobley Memorial Bridge".

Trooper John Wayne Hutchinson, age 29, was fatally shot June 4, 1975, while making an arrest of a drunk driver in McCreary County. Trooper Hutchins was assigned to Post 11 London and had served with the Kentucky State Police for two years. Trooper Hutchinson is buried at Elk Springs Cemetery in Wayne County, Ky. In honor of his service and sacrifice, KY 90 in Wayne County has been designated the Trooper John W. Hutchinson Memorial Highway.

In commemoration of National Police Officers Memorial Week, The Kentucky State Police Post 11 London will honor fallen Troopers on Monday and Tuesday May 16, and 17 2022. KSP Post 11 will do a wreath presentation at the burial site of each fallen Trooper. Friends, family, and co-workers of the fallen Troopers are welcome to attend.