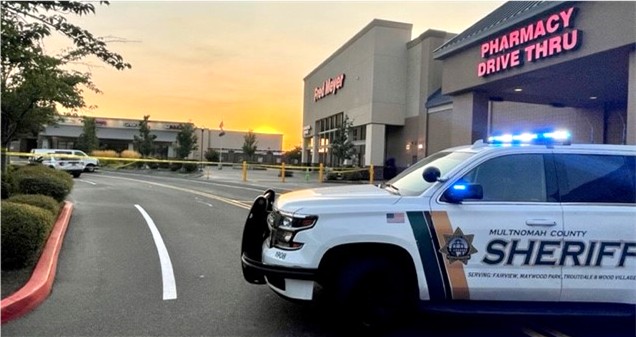 MULTNOMAH COUNTY, OR - (September 2, 2022) - The Multnomah County Sheriff's Office is reporting that at approximately 4:30 P.M this afternoon MCSO deputies responded to shots fired at the Wood Village Fred Meyer.

Witnesses reported that multiple suspects fled the scene before deputies arrived; at least one on foot and one in a car.

As deputies arrived and began their investigation, both physical evidence and witness accounts showed that a shooting between two parties happened outside the store.

As deputies processed the scene they found bullet strikes to the front of the store and multiple cars in the parking lot. A neighboring business was also struck.

At this time there are no known victims.

One person of interest has been detained. No arrests have been made.

Detectives assigned to the case are interviewing witnesses and reviewing store surveillance footage.