COLUMBIA, KY – The Kentucky State Police is reporting that a traffic stop Tuesday night on the Cumberland Parkway lead to a drug trafficking arrest of a Russell Springs man.

On Tuesday, August 30, 2022 at approximately 11:27 P.M. a Kentucky State Police Trooper conducted a traffic stop on a 2011 Chevrolet Impala passenger car on the Cumberland Parkway.

The Trooper observed the vehicle’s registration was not valid and the vehicle was driving recklessly headed eastbound on the parkway in Adair County. 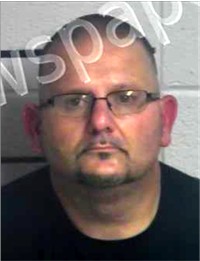 The vehicle was being operated by Barry Joe Kerr (right), age 47 of Russell Springs, KY.

During the stop, the Trooper observed Kerr drop a glass smoking pipe out of his hand.  Kerr and the vehicle were subsequently searched and the search produced:

Also discovered during the search was:

At this point, Barry Joe Kerr was arrested and transported to jail.

Barry Kerr was charged with the following:

This individual was lodged in the Adair County Detention Center.

Photo of the accused was obtained from the BUSTED NEWSPAPER.

The investigation is ongoing by Trooper Jake Harper.