MONTICELLO, KY - The Wayne County Sheriff's Office is reporting that: According to Sheriff Tim Catron the Sheriff's Office K-9 Narcotic/Drug Interdiction Team has made another drug trafficking arrest after a vehicle traffic stop.

At approximately 10:45 P.M the Deputies observed a vehicle traveling on East Kentucky 90 that became a point of interest to them after verifying the vehicles registration plate was canceled.

Once the traffic stop was conducted the Deputies realized the driver was known to the Sheriff's Office as possibly being involved in illegal narcotic sales.

After consent to search the vehicle was obtained the Deputies located and seized:

These items were consistent with the illegal sales of narcotics and were in different locations inside the vehicle.

Both the driver and passenger were questioned about the seized items with the driver stating everything belonged to her. 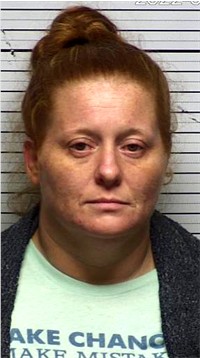 Bobby Goff was charged with

This individual was lodged in the Wayne County Detention Center.

Photo of the accused is courtesy of the Wayne County Detention Center.

Photo of seized contraband from the Wayne County Sheriff's Office

Deputies Barnett and Dennis were assisted at the scene by Deputy Brad Tucker.