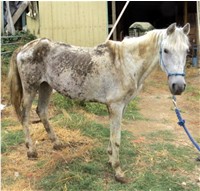 The Oregon Humane Society and Sound Equine Options, an Oregon based non-profit equine rescue organization, responded to help with documenting animal evidence and to take possession of the horses and cattle.

Photo of rescued horse (left) from the Oregon State Police.

NWRMJ also seized a Lamborghini sports car as a suspected proceed of the Marijuana growing operation.

NWRMJ was assisted in the operation by the:

The case and potential felony Marijuana and Animal neglect charges will be referred to the Clackamas County District Attorney’s Office.