McKee, Kentucky Man charged with Murder during Investigation of Deadly Shooting at a Residence on KY-3445 in Jackson County

McKEE, KY (September 19, 2022) – The Kentucky State Police is reporting that KSP Post 7, Richmond was contacted just before 5:00 P.M on Sunday, September 18, 2022, in reference to a shooting that occurred outside of a residence in Jackson County.

The initial investigation indicates a Mckee man was fatally shot during an altercation at a residence on KY-3445 in Jackson County.

The victim, Billy R. Issacs, 42 years old of Mckee was pronounced deceased at the scene by the Jackson County Coroner. 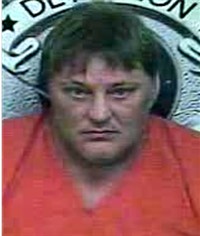 As a result of the ongoing investigation, Ricky Glenn McQueen of Mckee was arrested.

Ricky McQueen (right) was charged with:

Mr. McQueen was lodged in the Jackson County Detention Center.

The ongoing investigation is being conducted by KSP Post 7 Detective Anthony Bowling.