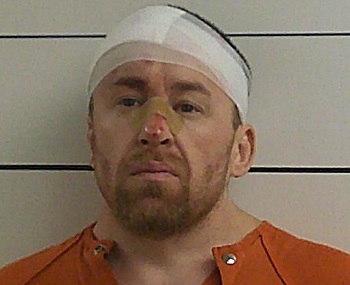 According to Smithers’ plea agreement, on May 1, 2022, Smithers physically assaulted a victim with whom he was in a romantic relationship.  Then, under threat of force and using a firearm, Smithers made the victim accompany him to a store, where he brandished the weapon, assaulted her with the weapon, and confined her in the vehicle.  Smithers then drove her to the Flatwoods area.  After again confining her in the vehicle, Smithers stopped the vehicle and forced her to exit.

Thereafter, still armed, he forced her to accompany him on foot, requiring her to climb fences, trespass on private property, and traverse random routes around the area for several hours.  She was eventually able to escape and hide from Smithers and law enforcement found her collapsed at a gas station.  Smithers remained in the area on foot, was spotted coming out of the woods, and law enforcement responded.

Upon being approached by law enforcement, Smithers shot the responding officer in the throat. The officer survived life-threatening injuries.

Pursuant to the plea agreement, Smithers faces a sentence of life imprisonment.

The following information is from the Boyd County Detention Center https://www.boydcountyjail.com/