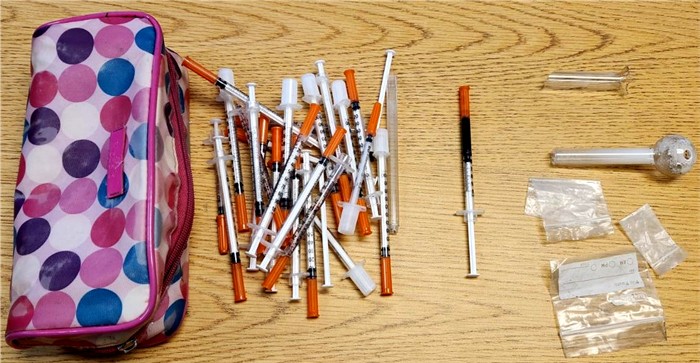 The arrests occurred off Old Whitley Road, approximately 3 miles South of London while deputies were investigating a vandalism and theft which had occurred earlier where allegedly two individuals were observed on surveillance video in the parking lot of Victory Baptist Church cutting holes in the gas tanks of two church vans.

The vehicle was observed to be a red Chevrolet pickup and two suspects were observed on the surveillance video. The Laurel County Sheriff's office posted a press release with photos of the suspect vehicle and the suspects.

Within less than an hour numerous tips were received from Laurel County citizens.

Sheriff's investigators armed with this information were able to quickly locate the red pickup truck and the two individuals allegedly involved in the theft and vandalism which occurred at Victory Baptist Church.

The two individuals were found in possession of several needles and Methamphetamine during the arrest.

Ashley Cope was charged with:

Natasha Scott was charged with:

In addition, this subject was charged on a Laurel District Court bench warrant of arrest charging failure to appear for arraignment on charges of:

Also, the subject was charged on a Laurel District Court bench warrant of arrest charging failure to appear in court for arraignment on charges of:

Photos of the accused are courtesy of the Laurel County Correctional Center.

Assisting on the investigation and arrests were: Lt. Chris Edwards, Deputy Travis Napier, Deputy Skylar McFarland, and Detective Robert Reed who is also the case officer.

Pictured top is the seized contraband and the rightside photos are of the pickup truck that was located and impounded by the Sheriff's Office and two accused being escorted out of the Sheriff’s Office by Detective Robert Reed for transport to the correctional center (Credit: Laurel County Sheriff's Office).