The arrest occurred on I–75 south of London after Deputy Weddle was dispatched to investigate a non injury traffic crash there.

Upon arrival at the scene Deputy Weddle located a silver Pontiac G6 involved in the crash and noted observing the driver throwing pills out of his vehicle and off his person. 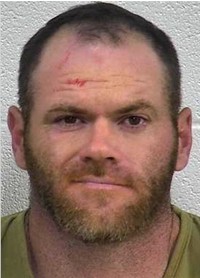 Deputy Weddle detained and arrested the driver of the crashed vehicle, Eric B. Payne (left) who was determined to be under the influence.

Eric Payne was charged with:

The recovered pills will be sent to the lab for identification.