Frankfort, KY (November 16, 2022) - Governor Andy Beshear's Executive Order to allow the possession and use of legally purchased medical cannabis is not without opposition.

The Attorney General of Kentucky, Daniel Cameron, has took to social media to challenge the governor's authority to take such action. He reminds everyone that the Kentucky General Assembly is the only body within the state (commonwealth) to have the legal authority to make policy. 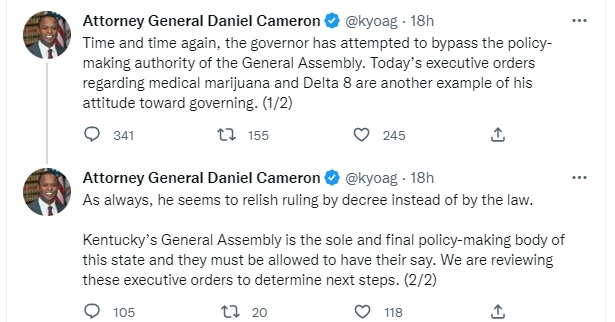 While Attorney General Cameron has received mixed reactions to these social media posts his arguments have legal merit. To our knowledge, Mr. Cameron has not come out in opposition or in favor of medical cannabis, he is only questioning Governor Andy Beshear's legal authority on the matter. AG Cameron also questions Governor Beshear's history of ruling by executive decree instead of by the law. Are these actions not part of the checks and balances we are supposed to have in government?

Will this issue become a central topic of debate in the 2023 Gubernatorial Elections?  With Governor Andy Beshear and Attorney General Daniel Cameron both being candidates we are sure we will be hearing more about this topic and many others that the two have differing opinions on.  With at least eight, 2 Democrat and 6 Republican, candidates already declared for next year's governor race things in Kentucky are likely to get very political very fast.