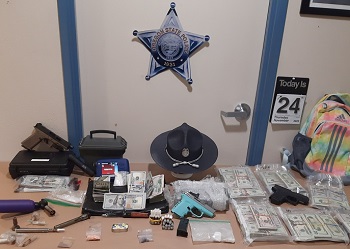 MALHEUR COUNTY, OR -ClayCoNews) - The Oregon State Police is reporting that on Thursday, November 24, 2022, at approximately 12:04 A.M. an OSP Trooper from the Ontario Area Command stopped an SUV for dangerous and erratic driving behavior on U.S. Highway 95 near milepost 1.

The passenger of the vehicle was then taken into custody without incident.

The vehicle was then seized, and a search warrant application was made.  After the search warrant was granted by a Malheur County Circuit Court Judge, a second more in-depth search of the vehicle revealed other controlled substances, two additional firearms, a firearms silencer, and $151,910.  The other notable controlled substances seized included approximately 23.8 grams of suspected Methamphetamine and 18 grams of suspected Ketamine.