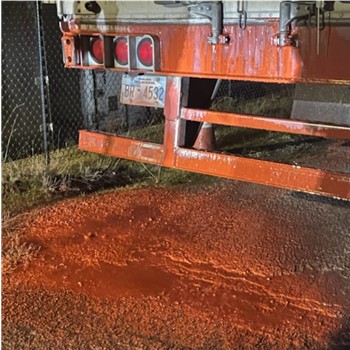 LIQUID DYE LEAKS FROM TRAVELING SEMI-TRUCK TRAILER FOR MILES, DRIVERS MAY HAVE BEEN IMPACTED

A semi-truck driver failed to stop despite learning that the liquid load he was hauling was leaking. The leak splattered red-colored liquid dye on multiple freeways and possibly other vehicles over several miles.

TROUTDALE, OR - On Saturday, December 17, around 7:30 p.m., Multnomah County Sheriff’s Deputies responded to a report of a leaking tractor trailer near NW Marine Drive and NW Eastwind Drive in Troutdale, Oregon. When deputies neared the location, they saw the road covered in a red substance.

The deputies contacted the tractor truck driver, 40-year-old Junior Jean, who reported the load is a liquid used to dye mulch. Deputies learned he drove north on I-205 from SE Sunnyside Road, then took I-84 east, exiting at NE Marine Drive in Troutdale. Jean stated he stopped to inspect the leaking load after another driver flagged him down. Despite the leak, Jean stated the company said to continue driving to the final destination. Jean traveled several more miles to Troutdale, while the liquid dye was spilling out of the trailer. 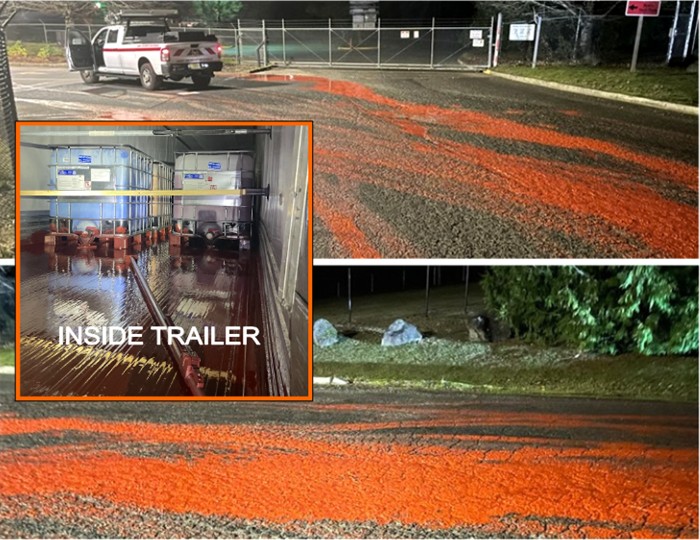 Red-colored liquid dye was splattered on multiple freeways and possibly other vehicles over several miles.

The Oregon Department of Transportation responded, as did the Oregon State Police, who confirmed the spill in Clackamas County and stretched for miles on I-205 and I-84.

While the driver reported that the dye is liquid soluble, (washes away when contacted by water), it is possible that vehicles who were adjacent to or following the truck might have been impacted by the liquid.

If you were driving on I-205 northbound, I-84 eastbound or NE Marine Drive between 6:00 p.m. and 7:30 p.m. on Saturday, December 17, it’s recommended that you check your vehicle. If your vehicle is stained after a car wash, please contact the Multnomah County Sheriff’s Office by sending an email to  and provide your contact information: full name, telephone number, vehicle make and model, and a picture of the vehicle damage.